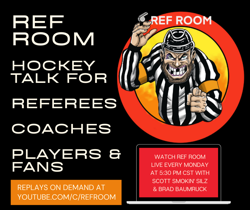 Scott Silz had this idea early in the COVID-19 pandemic: launch a referee-focused podcast, to help officials and others stay engaged in the sport.

Fellow official Brad Baumruck would be a co-host for the gabfest with Silz, but Baumruck was leery at the start. He told Silz that, after three weeks, they would end the venture if they had no viewers.

There were not a load of viewers early on, but they kept at it, despite Baumruck’s 2020 comment. And still are talking shop.

Flash-forward to today – The Ref Room podcast is approaching its third anniversary and has delivered about 100 engaging podcasts, most in the 30- to 60-minute range.

“The Ref Room started during the 2020 COVID-19 lockdown as a way to recreate one of the best environments in sports, the ref room,” fellow referee Brett Straley wrote on social media in mid-2021. “This (podcast) is not only for the officials (who) were missing (the sport) so much, but for the players, coaches, fans, and anyone else (who) loves the game of hockey.

“Scott and Brad have stepped up big for the hockey community with this weekly LIVE show. Their topics and interactive conversations help drive overall official development as well as overall rule knowledge for the players, coaches, and fans (who) watch the show. They have successfully recreated a place where stories can be shared, lessons can be learned, friends are made, and we can learn from each other’s knowledge and/or mistakes – exactly like the rooms I hate to leave in pretty much any local rink around the country.”

Said Baumruck: “Scott had an amazing idea and he brought me on for our relationship. As we have done the show, we went from officials who knew each other to close friends; that is (the) power of officiating, it brings people together from all walks of life.”

Baumruck, 39, who lives in Plainfield and works as a Liberty Mutual Claims Adjuster, is the Illinois Referee-in-Chief. He has been officiating for 24 years, skates as a Level 4 official and will work about 150 games this season, mostly from bantam to college club games.

Baumruck said the podcast’s goal is simple: To improve relationships among referees, players, coaches, and fans. And educate the vast hockey community. That comes almost every Wednesday, with a new show.

The Ref Room is geared for everyone in the game, though obviously anchored around officials.

“(The podcast) gets buzz; it’s surprising when I show up to a game and coaches or parents have seen it and say, ‘We wish more people would watch it, keep it up’,” said Baumruck, who noted that one of the takeaways so far from the podcast has been “how difficult officiating is when you really break it down, starting with the fears, worries of your first (game) … then the scoresheet and the dreaded first penalty.

“But we are attempting to prep new officials better for this first on-the-job training and also let the other participants know it really looks easy but is not.”

The most popular Ref Room to date featured former NHL referee Tim Peel who, in 2021, was fired by the NHL after a hot mic captured him boasting about whistling a penalty because he “wanted to.”

Peel was officiating a Detroit at Nashville game. Shortly after Nashville forward Viktor Arvidsson was whistled for a tripping penalty on Detroit defenseman Jon Merrill, a rink-side TV microphone picked up an official saying: “It wasn’t much, but I wanted to get a f---ing penalty against Nashville early.”

The NHL determined that voice was Peel’s and said that the ref would “no longer be working NHL games now or in the future.”

“Nothing is more important than ensuring the integrity of our game,” NHL Senior Executive Vice President Colin Campbell said in a statement at the time.

“Tim Peel’s conduct is in direct contradiction to the adherence to that cornerstone principle that we demand of our officials and that our fans, players, coaches, and all those associated with our game expect and deserve. There is no justification for his comments, no matter the context or his intention, and the National Hockey League will take any and all steps necessary to protect the integrity of our game.”

Baumruck and Silz talked with Peel about officiating and what officials can do better.

The Ref Room regularly delivers rule interpretations, tips, tricks and more. Such as, the story of a local official who “realized there was a medical emergency and walked up metal stairs onto a concrete slab to facilitate CPR for 12 minutes to a fan who had a massive heart attack during the game, then got back on the ice and officiated not only the rest of that game, but two more,” Baumruck said.

“We try to incorporate some things people may not think of when they are scorekeeping or maybe their behaviors on and off the ice.”

The Ref Room has drawn worldwide interest. During the USA Hockey Junior Development Evaluation of Officials, several of them were watching it from around the country, Baumruck confirmed.

The Ref Room will bring on more guests in 2023, plus more hockey videos to dissect.