From youth games to pro hockey, Chicago official Brett Straley works them all 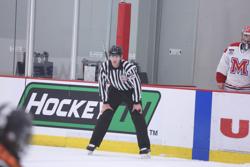 Brett Straley played youth hockey for the Muskegon Chiefs in his native Michigan before he transitioned to the high school ranks as a junior, to play his final two seasons for Muskegon Mona Shores, where he twice was a First Team All-Conference selection and also a First Team All-State honoree as a senior.

Despite being drafted out of high school by the Cleveland Barons in the NAHL, he chose to attend Western Michigan University, where he attempted to walk-on to the hockey team as a true 18-year-old freshman. Straley made it to the final day of tryouts, but ultimately was cut.

“Reality set in when (then-)coach Bill Wilkinson called me the next day to officiate his intra-squad game,” Straley said. “My playing career was over … I was now a referee.”

Now 47 and living in Chicago, where he is a Client Insights Principal for Information Resources, Inc., Straley has 16 years of officiating experience. “Between years 10 and 11, I took a 20-year break to raise a family,” Straley said, laughing.

Straley is a top-tiered Level 4 official with an impressive resume and drive for life in black and white stripes. After all, this season he works everything from 8U to pro hockey, not to mention, high school and NCAA. Just consider some of his officiating resume:

“I was an 11-year-old rink rat, as most of my friends were growing up. This put me in the perfect position to work the scoreboard, pretend I was a professional public address announcer, and ultimately get out on the ice and officiate games. We had several unsanctioned recreational hockey programs in Muskegon and this afforded several of us the opportunity to officiate a lot of youth games,” Straley said. “At age 12, I was able to certify as an official under what was known as AHAUS, now known as USA Hockey."

“I started officiating because I could make great money as a young person and that was extremely motivating … I was at the rink anyway,” Straley said. “I was originally led to officiating by the possibility of making great money. Something interesting happened along the way, though … I began to like officiating on another level, something I couldn’t put my finger on at the time, but I now recognize it as passion."

“The Muskegon Lumberjacks were an IHL team at the time and the No. 1 farm club of the Pittsburgh Penguins, (so) many players and current IHL officials were playing in some extremely good men’s leagues. I began to work these games and the officials began to help and mentor me through these games. I was learning quickly and it was this experience that got me noticed in USA Hockey seminars and brought on quality officiating opportunities within the West Michigan area.”

Straley’s first-ever game as an official, decades ago, was memorable, for sure. Well, to a degree.

“I do not remember anything about (the) game other than it had to be a squirt game at the L.C. Walker Arena, a 5,500-seat stadium in Muskegon,” Straley said. “I can distinctly remember a wooden portable equipment closet that housed all the rec league’s gear; they had a few officiating sweaters in there that we would just grab what was there and head out to the ice and call the game. I do not believe I had any real training prior to working a game. (They) must have been assumed I knew what I was doing since I played the game … it was a very different time.”

Straley admits, early on as an official, he never envisioned doing it long-term. “I believe USA Hockey’s Officiating Development Program was started the year I left officiating, so there was never anything out there other than the option to network with local assignors and the assigning technology back then was called the telephone, the one that plugged into the wall. Miss a phone call and you might not be working for a while."

“I don’t remember much about my first year officiating. I do, though, remember year one of my return to hockey officiating. It started with my long-time friends Jon Habetler and Jeff Cooke coming to Chicago for Jimmy Buffett at Wrigley Field. The festivities started in my backyard and as the day went on hockey and officiating kept coming back into the conversation, as they always do with this crew."

“The next day I registered with USA Hockey to become an official, again.”

Twenty years had passed and the game had changed completely, he said.

Straley quickly became a workhorse for IHOA upon his return to officiating. He worked hundreds of games and attended the IHOA/AHAI Advance Development Program meetings and skates just to meet people, network and expand his officiating circle in the state.

“Jameson Gronert and Joe Guzzardi were leading the program at the time, and I am sure they were wondering where the heck I came from completely unannounced – I just started showing up to learn,” Straley said. “That was what my first year back was all about: re-learning the modern game and getting (games to work).

“I fell in love with (officiating) all over again.”

Straley officiated the SPHL President’s Cup semifinal series in 2022, which he tagged as his favorite pro hockey memory.

“Players and officials alike needed to be at the top of their game,” he said. “Emotions were high and the atmosphere was unreal. When it was all over though the human emotion was moving. Watching some of these guys leave the ice – some elated, some until next season, and some for the last time as a pro and being thanked for the role I have played in their overall hockey life. It was moving, to say the least.

“I love talking officiating, breaking down video, grabbing coffee at the local coffee shops, post-game dinners, hanging out in the arena pre-game, and getting to meet so many great people from around the country. All of this has gotten lost a bit, in my opinion.”

Straley added: “I just love being at the rink, being around other officials. I love seeing officials grow and move their craft forward. When I see IHOA’s up-and-coming officials making their way to that next level, whatever level that might be, those are the things that become highlights for me. Each game is a highlight for me, though, no matter the level. I am happy to be out there for the game I skate and treat it that way. There is no game more important than the game you are assigned to at that very moment. They are all important to someone and should be treated that way.”

Straley is working a mix of games this season – from youth to college and minor pro hockey. His season included being on the goal line with 1:38 remaining in a 2-1 game to make a goal/no-goal decision. “There ended up being several factors why the goal would not count, but the rush of being there on the goal line, at the right time, (in) the right place to get (the call) right when it mattered most is a moment I will not forget for a long time,” he said.

Straley said joining the ADP, even as an older, experienced official, was one of the best calls of his career. “It allowed me access to more challenging games and allowed me the opportunity to get quality feedback from some very respected officials,” he said.

Straley praised my local officials for helping his growth and advancement as an official, including Scott Gaffney, Joe Prescott, Brad Baumruck, Jameson Gronert and many others.

Straley is one of the IHOA instructors annually for the pre-season seminars – and his teaching is as good as his officiating.

“Instructing is one of the things I am really passionate about,” Straley said. “I have a mission to prepare the officials to work the higher-level games. This cannot be accomplished though without teaching the basics and hopefully transferring my passion for officiating to the next group or generation of officials. In a world where people are always worried about who is getting what assignment, I just want to prepare the new officials to be eligible and ready to click on the bigger games. It is my opinion that we do not have an overall numbers issue with hockey officials; we have a lack of officials who are qualified to work games at the upper levels. There has never been a better time to advance through the system, work with some great officiating partners and learn the game.”

Dropping The Puck with … Brett Straley

Officiating Superstitions: “I always start on the right side of my body when getting dressed. As a linesperson I have a particular post and crossbar tapping procedure that has been carried forward from my playing days, and after the anthems I will reach down and make a cross on the ice.”

One Moment: “The 2022 CCM World Invite Weekend, Scott Gaffney and I organized an officiating BBQ in the Darien Sportsplex parking lot. We invited all the crews from the three Darien rinks and just got to hang out, eat, hydrate, and tell stories. We did this for three days straight, even when the weather was not the best. This is what it is all about and some of the moments we all learn the most not only about the game, but about each other. And let me tell you, this makes a difference on the ice.”