Playmaker Lauren Smith driven to get Ramblers back to the United Center. 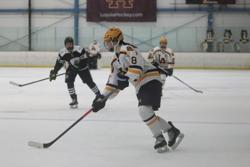 Lauren Smith, a senior playmaker on the Loyola Girls Hockey Team, is a 4-year varsity skater following the path of her older sister, Stephanie, who also was a 4-year player for the Ramblers.

Stephanie Smith, now 19, is a sophomore at Miami University, where she plays on the school’s ACHA D1 Women’s Hockey Team.

“When I was little,” Lauren said, “I would go to all my sister’s games and realized I wanted to play hockey as well. When we played together on Loyola, we would always work well together. I would love to play with my sister again if there is a possibility that could happen.”

Lauren Smith, 18, is undecided on her college plans, though she wants to keep playing hockey.

“When I was a freshman, I learned from the seniors the importance of the winning tradition of Loyola Girls Hockey. Now being a senior, it is very important to all of us to, hopefully, (win) state this year and continue that tradition. Bringing a positive attitude and hard work, I hope to achieve this goal with my team.”

The always upbeat and positive Smith lives in Chicago and formerly skated for the Niles Rangers, and Wilmette Braves. She also now plays for Team Illinois.

She skates in uniform No. 18 and has played since she was 7.

“I don’t remember (much about) my first-ever … my main memory is that I was the only girl on the team,” said Smith, whose style of play is often to “set up my wingers, to put them in positions to score.”

Influences on Your Career: “My dad has been the biggest influence on my career. He was my coach for my first six years of hockey.”

Favorite Hockey-playing Memory: “Playing at the United Center with my team. Before the game, we got to meet Brandon Saad and he signed a puck for each of my teammates.”

Off The Ice: “I love to hang out with my friends and family.”

Also Off The Ice: “I do workouts with my other team, Team Illinois, (particularly) cardio and strength exercises that help me on the ice.”

Best Hockey Tip: “All my coaches throughout my career always stress that 100 percent effort has to be given (on) every shift and (in) every game.”

Teammate Who You Could See As A Hockey Coach: Nora Joan Kulovitz