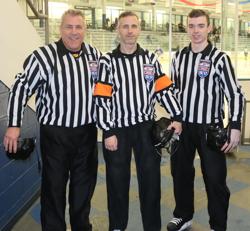 Dave Ballantyne has had quite a run during his 41-year stint as a local on-ice official. Yep, 41 years in a row; that is correct.

“I wish I (had) kept track,” of the exact number of games, said Ballantyne, 52, who lives in Bartlett and is a senior vice-president for CS Insurance Strategies (Marsh & McLennan).

Ballantyne grew up in Wilmette, where he started as a house league player before landing on New Trier Blue. “My dad ran the hockey program at Wilmette for many years and he stuck me on the ice to referee mite games,” said Ballantyne, who doesn’t remember too much about his first season as an official, though he does have a priceless picture from his first game – while wearing jeans to officiate.

“I did my AHAUS test over the phone with Bill Spohn, which helped me learn the rules. I also remember working a peewee game for Mike Astor at Skokie one Sunday morning while a junior in high school. There was a late arrival or no-show (after my peewee game) for a midget AAA game (between) the Chicago Young Americans and Little Caesar’s (of Detroit) which, at the time, was a huge game.

“The phone call came in from Don Olynyk … he said to put me out on the ice for that game, too,” to fill in for the missing official.

Ballantyne has skated strong ever since and once again this season is a top-tiered Level 4 official. He has worked eight years of NCAA Division III hockey, two years of juniors, and 23 Illinois state championship games, seven USA Hockey Youth National Tournaments, and more.

This season, he will mostly work local bantams, midgets, high school, AAA, ACHA and an adult league game here and there.

“I never thought I was one of the longest-tenured officials, but many people who were here before me are now gone. I still enjoy being on the ice and working games,” said Ballantyne, who also runs the AHAI / IHOA Officiating Evaluation and Supervision programs.

“Last year I worked about half a season, then dealt with a knee injury which led to surgery (before returning to the ice) in the spring. While off the ice, I evaluated about 50 games and supervised (about) 30 (local) playoff games.”

Ballantyne praised many IHOA officials, past and present, for helping his officiating career, including Derek Martin, Ken Michel, Don Olynyk, Sjoujke Brown, Jon Raslawski, John Cerza, Neil Levin, Don Allord and Jack Raslawski, among others. “There are others, but cannot name them all,” he said.

Ballantyne isn’t talking retirement, yet. Instead, he’s shooting for 50 years and he’s also passing on his officiating passion to his sons. His oldest, Luke, skates for the St. Cloud State ACHA D2 team and refs, too. His younger son Noah just passed his Level 1 officiating exam and will be playing Wolf Pack NWHL bantam this season.

“It’s been fun working with Luke. He has a good work ethic and loves the game,” Dad said. “I am looking forward to being on the ice as a mentor for Noah this season.”

His son, Liam, is going into umpiring baseball. His 3-year-old is still undecided on officiating, Dad said, laughing. “Thank you so much to my wife, Allison, for putting up with my officiating schedule for the past decade.”

Ballantyne, since 2008, has run IHOA’s evaluation/supervision program, which includes as many as 400 games and 850 evaluations in one season. He also is responsible for assigning all AHAI / IHOA supervisors for playoff games each year – and that’s about 650 games assigned over a 5- or 6-week span.

“I was working the High School Nationals in Omaha,” Ballantyne began. “During a game, a player broke his stick and threw it out of the arena near the stands, with fans nearby. According to the rules, that is a game misconduct, which I had no choice to call. After the game they have hearings to discuss the possible suspension. I advocated for the player to be reinstated immediately since I am sure he did not know the rule and had no malicious intent. The committee let him back with no suspension. That evening, the Stanley Cup was at a private party that I attended with several fellow officials. Ironically, the kid who I got reinstated was in the room. The coach grabbed me and got me and the kid in a picture … with the Stanley Cup.”

Officiating Superstitions: “At center ice on the opening (faceoff of a game) or (to start a) period, I flip the puck to myself like a coin and then go into my drop.”

Hey, I Remember You: “I work a fair amount of adult league games. It amazes me how many players will come up to me and say that they remember from, oh, 30 years ago, doing their youth games.”

Legacy: “I hope to be remembered as both a fair official and one who always put in a full effort, every game. Also, I want the IHOA / AHAI Evaluation/Supervision program to be a model for all other associations to follow.”