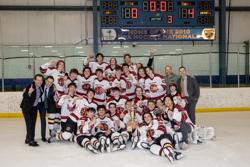 Matt Smith was getting ready for the season, what would have been his seventh as the hockey director/head coach for the Saint Ignatius varsity hockey team when an opportunity presented itself that was an incredible opportunity just to be considered.

Smith, 48, was offered the chance to move to Buffalo N.Y., and join the Sabres as a video coordinator, where he’d work directly with Buffalo’s head coach, Don Granato, the former NHL player from Downers Grove who has been coaching since 1993, including time as an assistant for the Chicago Blackhawks. Granato was hired as an assistant coach for the Buffalo Sabres in 2019, became the team’s interim head coach in March 2021. The interim tag was removed on June 29 for the 2021–22 season.

Smith and Granato have been friends for more than 12 years, after first meeting when Smith was the hockey director for the Chicago Jets and Granato had been with the Chicago Wolves and was serving as a professional scout in the area.

Late this summer, while Smith was thinking about Ignatius, Granato asked Smith if he would be interested in the opportunity.

“I have a tremendous respect for Don as a person and believe he’s one of the brightest minds in the game,” Smith said. “I have a good feel for the way he thinks the game and his approach to developing young talent – namely, a focus on concepts and habits, not systems.

“It was an interesting time in my life (for) a career change and move. I got married in June and had my honeymoon scheduled for early-September in Italy. (We) had been looking for houses locally but, thankfully, given the crazy real estate market, nothing really came together.”

Instead, after coaching locally for 20 years, including years with the Chicago Stallions and Evanston High School, among others, he headed to upstate New York – to the home of the Sabres, a team that finished 32-39-11 last season (fifth-place in the Atlantic Division of the Eastern Conference).

Smith works alongside another video coordinator to help code in game and look ahead to pre-scout opponents. During games, he is in communication with the coaching staff via radio and monitors the system used by NHL teams to review for coaches’ challenges.

“Of course, I’m excited for the opportunity to work at this level, mainly what makes it so appealing is the chance to work directly with Don and be a part of what he and general manager Kevyn Adams are building here in Buffalo. It is a first-class organization that does things the right way. I am eager to learn, grow and contribute.”

Smith admitted that leaving Ignatius is “bittersweet,” especially after the jubilation that the Wolfpack enjoyed this past March. Saint Ignatius stopped Benet Academy 4-0 to sweep the best-of-three series and claim the school’s first Kennedy Cup title. Ignatius rolled to the championship without losing a game (6-0) after finishing 18-2 in regular season play to win the prestigious Chicago Catholic Hockey League (CCHL) title over Benet, which had won the past two Kennedy Cups.

“It was a great fit and I really take a lot of pride in what we were able to build and accomplish there,” Smith said. “The program is in excellent hands under the leadership of (new head coach) Spencer Montgomery, so it (should) be a seamless transition. We’ve been working together for seven years and have a great relationship, and we continue to stay in communication.”

Smith will travel to all Sabres games and now, instead of wondering how to stop Stevenson or skate past New Trier Green, he’s focused on the play of Tage Thompson, Jeff Skinner and Rasmus Dahlin, and others. The Sabres, established in 1970, have twice advanced to the Stanley Cup Finals, losing in 1975 and again in 1999. The Sabres, along with the Vancouver Canucks, are the longest continuously running active NHL franchises to have never won the Stanley Cup. The Sabres have the longest active playoff drought in the NHL (11 seasons), which is an NHL record.

“Video is a valuable tool to help understand and instruct the game better. Most important, however, are relationships – among the coaching staff, with players directly, etc.,” Smith said. “We want to use video as a resource to communicate concepts, habits and details in clear and simple language. It’s always about getting better and focusing forward.

“The decision to move on had nothing to do with Ignatius. This was a unique and unexpected career and life opportunity. Timing was great in that my wife and I were just beginning this next chapter of life together and we were both excited for the adventure.”

Smith said goodbye to the Wolfpack, and a heartfelt thank-you, during the team’s tryouts at the end of August.

“I take a lot of pride in what Spencer and I built at Ignatius over the last six years,” Smith said. “We had a great run, went to four Kennedy Cup finals in six years. It was great to finally get over the (hump) and bring home the school’s first-ever Kennedy Cup.

“Of course, would have loved to win it earlier and advance further in the state tournament, but still, I felt like we really got the most out of the group. What matters most is the culture and sense of community we’ve built. Wins and losses come and go, but culture remains. We have several alumni continuing to play at the college club level. Everyone looks back fondly on their time (at Saint Ignatius) and really cares about each other and the success of the program.”

Smith said Montgomery is the “perfect fit” to skate into the Wolfpack head coaching position, even without past head coaching experience at the high school level. “I am excited to see him leave his mark and bring his unique voice to the program,” Smith said. “Everything is in place for sustained success. It will be a younger team this year given that we graduated 16 seniors from varsity. Still, the core is intact to compete at a high level. We will just have to be a little more patient and focus on development. That kind of parallels to the team here in Buffalo. We can’t get too focused on outcomes, just focus on getting better daily.”

Smith said his career highlight at Ignatius was as much about off-ice moments as the W’s that the Wolfpack claimed in Catholic League action. “It’s always about the people,” he said. “We’ve got a great leadership structure and culture in place. I think so highly of the school, our players and (their) families. We had our first-ever alumni golf outing this past May; that really brought everything together nicely and it was special to see multiple generations of players and families together, celebrating the organizational success that was a shared and collective effort years in the making.”

Smith added: “My time at Ignatius, and coaching locally more broadly, prepared me well (for the Buffalo job) in the sense that it always comes down to relationships and development. You want to help young people reach their fullest potential in life and there are a lot of constituencies involved in the game, no matter the level. You must manage those relationships and stay focused on the task and opportunity at hand. You cannot get distracted by outside voices or other irrelevant factors. You owe it to yourself and your teammates to be fully present and engaged. The basics remain, (no matter the level): stay humble and hungry.”