Referee Max Lieberman set to work in the NAHL, NA3HL – and will do local mite games, too 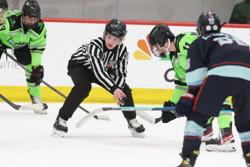 Max Lieberman officiated his first-ever game at the start of the 2019-2020 season: a squirt NIHL game at Oakton Ice Arena in Park Ridge. He took advantage of the IHOA Mentor Program and mentee Ted Barnhart walked him through officiating a hockey game that day.

“I was extremely nervous, but got through it,” Lieberman said.

He was immediately hooked.

Flash-forward a few seasons and Lieberman, now 19, is a Level 4 official – and he’s been back on the ice officiating with Barnhart, now as equals.

“In my first season (as an official), I got the chance to work a peewee major AAA game between CYA and Victory Honda at Centennial Ice in Highland Park,” Lieberman said. “A first-year official would never normally get that experience, but (due to) the referee shortage, I was able to pick up that game. My partner was my age but had more experience than I did. He walked me through the differences between officiating NIHL, CSDHL and AAA. We got out on the ice, and I worked hard. I did my best to ‘fit in’ and made it look like I belonged (at) that level. As a newer official, one who had never worked higher levels, the thoughts of ‘Do I really belong here?’ was flowing through my mind.

“We crushed it, and I came back to the ref’s locker room super thrilled. I exchanged info with that official and we became buds. We have since traveled around the country to officiate hockey together.”

Lieberman, who lives in Morton Grove, is a 2021 Maine East High School graduate who now attends Aurora University, where the sophomore plays defense for the school’s ACHA D2 team.

But officiating is his passion.

“Playing hockey my entire life helped me in the most important aspect of officiating: skating,” said Lieberman, whose playing career started for the Glenview Stars and included time with the Florida Jr Everblades, the West Dundee Leafs and the Northern Express.

“I developed strength, speed, and agility (as a player) to make me stand out as an official. While playing, I developed hockey sense/hockey IQ, a feel for the game, and anticipation for where the puck will go. I am a student of the game."

He’s now much more serious about the officiating side of the game. And he’s skating some high-pressure games, such as high school playoff games, CSDHL playoffs and AAA HPHL and state playoffs. He has worked seven state championship games. In addition, he has officiated the U14 Tier 1 USA Hockey National Championships in Chicago this past season. During the summer of 2021, he attended the Central District Officiating Camp in Ames, Iowa.

“I worked all levels (this past season) from mite to midgets, with an occasional Tier 3 junior hockey game within the district,” Lieberman said. “(Fellow official) Brett Straley told me early in my officiating career that he’s never too good for officiating even the youngest levels of hockey and I envied that. I follow that saying by working a mite game occasionally.”

Also, last season he traveled to Dallas to work an NAPHL event, in addition to working multiple tournaments and showcases around the country – in Detroit, Nashville, Minneapolis, and elsewhere.

“IHOA has helped me become the official I am today by introducing me to some outstanding individuals who have helped and mentored me since I started,” Lieberman said. “Without (the help of so many fellow officials within IHOA), my officiating career would have ended before it began. Certain members of IHOA have pushed me forward and brought up my name in administrative talks to work higher level games earlier than some, and without certain people, I wouldn’t have had the opportunities that I have been presented with.

“As a member of the Advanced Development Program (ADP), it has put me in contact with top-notch evaluators to adjust and tweak my game.”

Lieberman sang the praise of many local officials who have helped his game, such as:

“I met him (at one of my first) games and he has easily been the most helpful, outstanding, and encouraging official I have ever worked with. If you ever have a question, he is the one I go to. He constantly supports and has my back, no matter what.”

“He is the first professional official I met at Central District Camp during the summer of 2021, (and we) stayed in contact from that camp to this day. He is another outstanding connection, an amazing official and even a better person. He has helped me transfer from the youth to the junior side of officiating.”

“We went to high school together at Maine East and live about five minutes away from each other. I got him into officiating, and we constantly work all levels of hockey together- from mites to juniors – and have traveled the country with him to work more and more hockey every weekend. Officiating has brought us to become boys for life. We always have a great time working together, even (for) the youngest levels of hockey.”

“Without him mentoring me for my first game, I would have been completely lost out there. Another great person who I have stayed in contact with since my first game and we now work older levels of youth hockey together.”

His twin brother, they often work together. “He always helps me out in a pinch, drives me to the rink occasionally, and more than likely will help me and skate a game that I had on my schedule if I can’t do it. He even tied my skates a few times before some games when I broke my wrist and couldn’t pinch my thumb and pointer finger together to tie a knot. Yep, I officiated hockey games with a broken wrist, in a cast, on the ice.”

Lieberman will be officiating this season in the NAHL and the NA3HL. He also will work all levels of local youth games.

“It’s not always going to be easy (as an official), but you must work through it and ask questions. There are people out who will help you,” he said. “Also, always have fun and be sure to work every game like it is Game 7 of the Stanley Cup Final. You never know who is watching your game.” 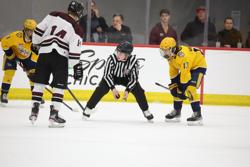 On The Ice With … Referee Max Lieberman

Officiating Superstitions: Puts on his gear left to right, all the time.

Officiating With His Brother, Alex: “It’s a cool experience and it’s always important to be able to talk about things during the game without having to sugarcoat anything. Outside of the game, we talk about officiating rules in general, or how our games go to better ourselves every game.”

This Summer: “Going to the two (officiating) camps (were great) experiences. I built lifelong friendships with officials from all over the world, learned a ton in the classrooms, and changed my game for the better.”

The Balance, Playing & Officiating: “I would play my own game in Central States for the Express, get out of player gear and into ref gear, or vice versa, and be back on the ice 10 minutes later. (Officiating) is a great opportunity for high school players to stay in the game and make some money while perfecting their skating. I have become a way better skater as my years of officiating have grown.”