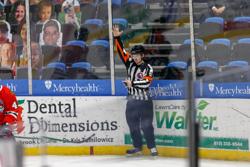 Jack Young always want to be a referee. He was obsessed with hockey officials even at age 6 or 7, though he now doesn’t know the root of that passion.

Young’s hockey path was paved for him as a player, coach or team executive. After all, his dad is Wendell Young, the only player in hockey history to have won all four famed hockey championship cups: the Memorial Cup, Calder Cup, Turner Cup and Stanley Cup. Wendell’s NHL career spanned 187-games before he landed on the Chicago Wolves, where he was a goalie and has since transitioned into the team’s general manager.

His parents got him a referee sweater when he was about 8, and he wore that to Wolves’ games, not a Wolves jersey. When he was 12 or 13, Young met NHL official Kyle Rehman at a Wolves game, and Rehman gave him an NHL official’s sweater, a whistle and more.

By 15, he was officiating local games and that same season, due to multiple concussions, he was forced to stop playing, as he had been for the Northwest Chargers.

Young switched to focus on officiating.

His passion was ignited.

“It was fun,” from day one as an official, Young said. “Before I could drive, I had my parents drive me all over (the area) just so I could skate games. It probably wasn’t to my parent’s delight, but they did it.”

He officiated about 300 games in his first season, and then 400 the next season. Once he got his license, that total increased even more.

“I was decent when I started, improved over time, continue to improve and am now in love with (officiating),” said Young, who lives in Arlington Heights.

He graduated from Prospect High School in 2019, earned an associate degree at Harper College, and has aced advanced-level games.

“From the beginning, Jack has been a humble, hard-working young man with great talent,” said Erin Blair Gnagni, who officiating locally, nationally and internationally for more than 20 years. “I had the honor to mentor him early on as well as working with him through the development program. He is a coachable official who wants to do his best for the game.”

The 2021-22 campaign was his first as a full-time professional official – and he even skated the ECHL Finals, as the Florida Everblades needed just five games to stop the Toledo Walleye in the best-of-7 Kelly Cup finals.

“It’s wild to think (about my progression), where I’m at right now, especially at (age) 21. I’m grateful to be where I’m at and I have a lot of people to thank for helping to get me where I’m at,” said Young, who singled out many from the Illinois Hockey Officials Association (IHOA) for aiding his improvement, including Brad Baumruck, Carl Sassolino, Joe Guzzrdi, and others.

During the Finals, Young had his photo taken with the Kelly Cup, named after Patrick J. Kelly, the league’s first commissioner. He also got to meet the 86-year-old Kelly.

And he skated in Toledo in front of about 9,000 raucous fans with many chanting “Ref, You Suck.”

Young said he isn’t sure which leagues he will officiate this upcoming season, likely the American and ECHL. He anticipates only working 90 games, give or take.

“This past season, wow, it was a lot of fun,” said Young, who had been used to car trips between games, but that shifted to airplane rides on the pro circuit.

Case in point, he officiated a Sunday game in Portland, Maine, then was in San Diego for a Wednesday night tilt.

His officiating goal is clear: make it to the National Hockey League (NHL), just like his dad did. Well, as an official, not as a goalie.

“I want to keep driving to succeed, improve and advance,” said Young, who still has – and cherishes – the relics given to him about a decade ago from Rehman.

“I never envisioned the fast progression, accomplishing what I have to date. But I know that all officials can take something from every official that you work with, from every game you work, whether it’s something good or something bad.”

Young encouraged all Illinois officials, especially the new refs and those with limited experience, to take every game possible. “You can always learn from something you do. I can skate a squirt game and still learn something that I didn’t know before (the game). And you also can learn from every official who you work with.”

Young continues to support IHOA at its annual, pre-season seminars, serving as an instructor for the past four years.

So, has Wendell changed his attitude toward officials thanks to his son’s fast-charging career in black and white stripes?

“I like to think I opened his eyes a little bit (about officiating),” Young said of his dad. “Before (I started officiating), he didn’t really like the officials, any of them, and got into (arguments) often with them. But I think I’ve really opened his eyes to a different side of the game.

“When I went to officiating camps, he was amazed at how there were drills for officials to improve, and just how much work that goes into officiating.”

Young will never officiating an AHL game involving the Wolves, for obvious reasons. In fact, he does not officiate the 7-team Central Division, which includes the Wolves.

Wendell Young and the Wolves also are coming off a successful 2021-22 season, as Chicago captured the Calder Cup, named for Frank Calder, the first president (1917–1943) of the NHL.

“I really want to make my parents proud,” said Young, who laughed telling the story of his dad talking years ago before a game with an AHL official who, well, Young didn’t always agree with.

“He called (my dad) over to talk and said, ‘Your son likes officials?!’”

Jack Young liked officiating then and certainly does still today, even after calling countless penalties.