Finland took the final medal of Beijing 2022 this past February, winning the nation’s first ever Winter Olympic ice hockey gold medal with a 2-1 victory over the defending champions, the ROC. The Finns became world champions for a third time in 2019, but had never won Olympic gold, twice reaching the deciding game (1988 and 2006) but falling short.

That deciding game, with viewers around the world holding their breath with every slapshot and kick-save, truly resonated in Illinois.

Billy Hancock, 30, who had been living in Lake Villa and spent 10 years officiating in IHOA, was a linesman, one of the four on-ice officials. And it was Scott Zelkin, of Buffalo Grove, who, in his role as Manager, Officiating Development Program for USA Hockey, had the honor of informing Hancock that, yes, he would be skating the gold medal game.

“I was fortunate to be one of the four Officiating Coaches assigned by the IIHF to oversee the Men’s Olympic Ice Hockey tournament,” Zelkin said. “The day before the medal games we had individual meetings with all the officials who worked the Olympics.

“One of the highlights of my professional career was being able to tell Billy, and (fellow American) Andrew Bruggeman who refereed the game, that they were working the gold medal game.

“The smile on (Hancock’s) face was priceless.

Hancock, who will enter his 17th season as a hockey official in the fall and worked five overall games at this year’s Olympics, still recalls talking with Zelkin in Beijing, learning he would be one of the four on-ice officials, of the 27 working those Olympics, and of course the game itself. Well, not much of the game.

Zelkin asked Hancock how he thought he did in the tournament. Hancock replied, “I thought I did a great job and think I proved myself to be one of the better officials here.” Hancock was nervous with every word.

“We think you’ve had a great tournament,” he told Hancock, “So good, in fact, that we’d like you to work the last game.”

Hancock was in shock.

“It was kind of cool having Scott Zelkin, who has really helped develop me over the past decade, be the one who told me that I was working the gold medal game.”

The gold medal game featured the two Americans, along with a Swedish referee and Canadian linesman.

“I’m always a last-minute dresser (before games). I usually tie my skates right before we go on the ice,” said Hancock, from suburban Detroit. “This game, I was fully dressed 17 minutes before we went on the ice.”

It was then a waiting game before they went on the ice, sitting mostly in silence except for the music that was playing in the background.

Once on the ice, after a hot lap around the rink, their names were announced. Then he settled in, he said.

“Once the puck dropped, it took, oh, about 2 minutes before it was just another hockey game,” Hancock said. “The game ultimately flew by.

“I remember talking with some players, joking around with (fellow) officials. But mostly, that entire 60-minute hockey game was a blackout. It was so much fun, an unreal experience.”

It is the No. 1 moment from his officiating career, without question.

“I might not remember everything about that hockey game, but to be one of the four officials on the ice for that game …that was amazing.”

“Billy knocked it out of the park in the gold medal game, as did his three partners,” Zelkin said. “It was extremely rewarding knowing how far he’d come to see him on the ice in that huge moment.”

Hancock’s road to that milestone moment started years and years ago. His launching pad to that gold was a midget AA game he officiated in the Detroit area when he was 17 years old.

Attending that midget game was a representative of what is now known as the USA Hockey Junior Development Program. He watched Hancock skate and was impressed. After the game, he asked Hancock if he wanted to attend a development training camp.

“That’s how I got my start (officiating) junior (level) hockey,” Hancock said. “There’s no blueprint to the gold medal game. But, if you want to officiate high-level hockey, we have the resources (through USA Hockey) to make it happen.

“The sky’s the limit (in officiating), if you put your heart into it.”

After all, Hancock is the first person in his family to wear skates. Neither of his parents or any relatives had been involved in hockey.

“Just remember, you never know who’s in the building watching a game,” that you are officiating.

Hancock learned last October that he was a possible Olympic candidate, but then it was a nerve-racking waiting game, made even more tense by the NHL. Would NHL players participate, or not? If so, NHL officials would work the games, too.

He was told on January 3rd that, yes, he was Beijing-bound.

He was in shock, reading the email that confirmed he was going to Olympics.

“One of my major, long-term goals in officiating was to officiate international hockey and possibly the Olympics. Then to see it in writing and know that you would be going with some of your best friends, that was very cool,” Hancock said. “Being an Olympic official was something we all worked very hard for. It was an unbelievable experience.”

He flew overseas on Feb. 4 and was immediately greeted by, well, the COVID-19 pandemic. When he arrived, they were met by Chinese officials wearing Haz-met suits.

He ultimately had about a day and a half to acclimate – and during the Games, he was tested daily for COVID.

They stayed at a Holiday Inn hotel and it was a full lockdown, thus, he could not go anywhere but to the rink or the hotel. He was not allowed to go to any other event, such as curling which was the one he wanted to watch in-person.

“That was kind of unfortunate,” Hancock admitted. “Still, we made the most of our 20-day experience.”

That included, ironically, watching the Games on the Peacock streaming service from his hotel room. “I was watching live events happening in Beijing, maybe 5 minutes away, yet I could not attend,” he said.

Nonetheless, the games he officiated were fun, very intense, he said.

“Every game I had was pretty competitive; there were no real blowouts,” he said. “You look at it as just another tournament. You can’t have the mindset that this is the Olympics; that would make you more nervous. It was just another hockey game, (so you) work your butt off. You control what you can control and work to get yourself in that last game.”

Said Zelkin, “Billy is an official who always works hard. I’ve never seen him out on the ice not going as hard as he possibly can, regardless of level (of the game). His consistent effort is something that has always separated him from other officials.

“While effort was never something that needed improvement, his awareness of situations and feel for the overall tenor of the game have improved greatly throughout the years. As a younger official, he always skated hard, but not always in the right directions. Now, Billy knows where to go and when to go there, whether it is to a potential hot spot on the ice or to help and support one of his partners.

“He can now read a game better and knows what the game needs in terms of when to inject himself into a situation versus taking a more ‘hands off’ approach.” 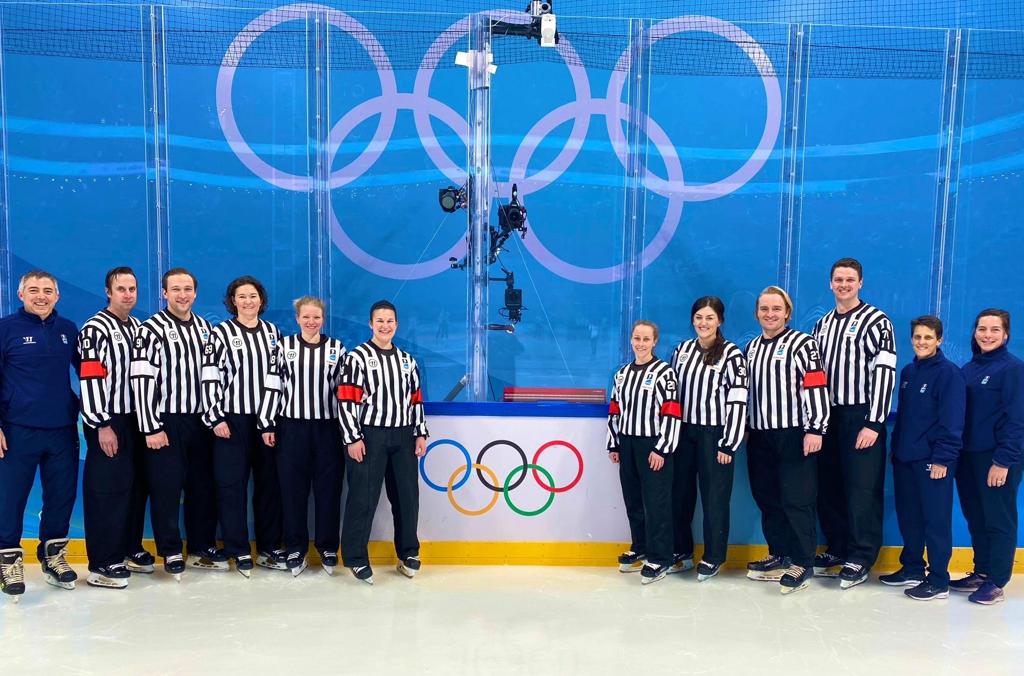 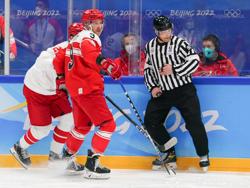 Hancock said his run officiating Illinois amateur games was memorable and hopefully not done. He said he isn’t sure where he will be based this upcoming season, in Illinois or Michigan. This past season, he officiated in the American Hockey League (AHL), the Big Ten Conference and a pro league in Germany. He also skated locally, mostly working high school and tier I midget games.

He did work one mite game, too.

“It was fun,” Hancock said, laughing. “It was cool to watch the (mite) players and I was there to see (the other official) call his first-ever penalty.”

Hancock was officiating a midget game in Pleasant Prairie, Wisc., and was asked to also officiate the mite game beforehand to help. He agreed, without hesitation.

Hancock’s first-ever game as an official was a squirt game in Detroit.

“There’s a lot of hockey to work, especially in Illinois,” Hancock said. “Go on that (AHAI/IHOA) website and there are thousands of games to work. Don’t look at it that you must work the highest-level game. Every game is an opportunity to make yourself better. It doesn’t matter if it’s a peewee house league game or the high school state tournament, there’s always something that you can get out of a game, if you try hard. Always put in the effort. No game is below you. Take the opportunity on the ice to work on your skills.”

He also suggested that officials take advantage of the abundance of instructional videos that are offered by USA Hockey.

And don’t give up, he stressed.

“Quite often, parents, players and coaches are overly abusive to officials, but don’t give up and don’t be afraid to stand up for yourself,” Hancock said. “That might be hard for a 14-year-old official, but, if you do, and you stick around with this game, and dedicate yourself to being a great official, you can stay in the game for a long, long time.

And it will pay off, if you do all the right things.”

He quickly realized that officiating is a great opportunity to develop in hockey – and earn money as well.

“This is a fun job, regardless of the level of the game. I love every single day, every single game that I officiate. If someone asked what my dream job would be, my answer is, being a professional referee,” Hancock said.

It is Hancock’s effort on the ice, regardless of level he is officiating, that has shined.

“Billy is a student of the game. He is good at self-reflection and learning from others,” Zelkin said. “He asks questions … why did this happen and how can I handle it better?

“Billy is a team guy. He’s always trying to serve the game and make his partners on the ice better officials. Though he has had success at the highest level, one of the things I’m most proud of when I think about him is that he is always willing to give back, (at) both the local and national levels.

“USA Hockey and AHAI/IHOA are successful because of people like Billy. I’m proud to have been a small part of, and a witness to, his success.”