The Showcase has now come & gone but one thing is for certain…..this year’s event will go down in history for the Illinois Girls.

Let’s start at the beginning as we were blessed to be able to enter 2 teams this year. 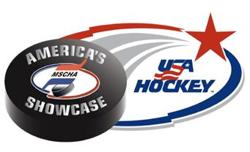 The best thing about having 2 teams representing Illinois was that these players really bonded & supported each other on & off the ice…….the blend of players from various high schools & club teams showed the multitude of skill/talent we have all over the State. These young ladies conducted themselves with respect & compassion for others all while having fun & showing confidence in themselves & each other with every shift on the ice.

Team White started the Tournament in a game versus Missouri (host) & played a great game but fell 1 goal short losing 3-4. The next opponent was no easy task, North Dakota, & our Girls came out flying & beat them 7-0.

Indiana was next & with another win, 3-0, they were looking good to possibly be in the semifinals. Unfortunately, Minnesota proved to be a bit tougher & we ended up losing, 7-1. With Missouri pulling out a victory over Indiana, Team White was knocked out with a 2 & 2 record.

Up next, Team Black.

This team came together very quickly as evidence during practices. It was clear from the onset that these players, serious rivals during the season, would play some of the best hockey they have ever played. Thursday afternoon it took less than 2 minutes for the 1st goal to be scored & the team went on to beat North Dakota 6-0. With Wisconsin being our opponent on Friday, the coaches knew this would probably be one of the toughest teams to beat. Another victory was added to the bracket board as the team defeated Wisconsin 3-0. This was the first time ever in the Showcase that an Illinois Girls’ team had beaten our neighbors to the north. With this win, the team locked in a 1st place seed in the semifinals. Team Black went on to seal pool play with a perfect 3 & 0 record by shutting down Indiana 7-1.

The girls yet again came ready to play. They lit up the scoreboard 9 times to defeat Missouri 9-0. We were headed for the Championship game where we once again would be facing Wisconsin. It took only 20 seconds for the 1st goal to be scored & we all knew there was no stopping this team. We would go on to win 3-0 & bring home the Championship.

Meeting these young ladies & their parents has been a privilege & an honor.

The best of wishes & success in all their aspirations for what is yet to be their future!

A very special THANK YOU to:

for filling this year’s Showcase teams with pure excitement & everlasting memories that these families & their daughters will not forget. Your dedication & passion to the players of both teams as well as the Girls Hockey Community in Illinois is greatly appreciated!