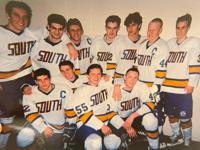 Tim Benz played mite hockey about 25 years ago in Glenview and was teammates then with Ted Ward. They skated hundreds of games together over the years, and just as many practices, as both played for Glenbrook South High School.

Hockey built a lifelong friendship rooted in the youngest level of hockey through the present-day – for Benz, Ward and countless others.

“We talk about it all the time (at Saint Viator): This is your family,” said Benz, 35, who lives in Libertyville. “You will always have these memories from hockey. When you’re 20, 30, 50, 60, or whatever age, you will always remember your hockey career, so cherish the moments, cherish your friendships.”

Benz played his youth career for the Glenview Stars, then landed on the GBS varsity team, where he was the team captain, MVP, all-conference, all-area, and all-state honoree both his junior and senior years. Tim was selected to the prestigious Chicago High School Showcase Team as both a junior and senior, and he also was a decorated three-year starter on the Glenbrook South varsity baseball team. Benz played hockey at Indiana University and then professionally for the Michigan Moose and Pennsylvania Blues.

It’s no surprise that about 75 percent of the contacts in his cell phone are hockey-related. After all, he was in learn-to-skate at age 4 and when he recently looked at a GBS photo from his playing career, some of his teammates were his teammates when they were mites – and he is still friends with them today.

“Hockey teaches you how to get through adversity, which you also endure in school, in work, in your personal life, in the real-world, etc. Lessons learned in hockey carry into the workforce and beyond. Such as, battling through adversity and how you’re going to pick up the guy who’s down,” said Benz, whose coaching career include one season as the GBS varsity assistant coach and four seasons as an assistant for Loyola Gold before landing at Saint Viator. He also has been a longtime youth coach in Glenview and is now in his second season as the hockey director in Wilmette.

“You spend a lot of time with (hockey teammates) and the season is long. Plus, the team is about 20 (players) at the high school level, (fewer at the younger levels). So there usually are no real cliques. When you’re around the same 20 guys for six days a week for six months, maybe more, you get to be close with your teammates. You know your teammates’ families, their siblings, their parents, etc. You truly become like family.”

Hockey brings learning experiences, good and bad – and teammates must battle through all, supporting when the smiles are plentiful and when an errant pass leads to a goal for your opponent.

“There’s going to be adversity, much the way there will be favorable moments – goals, wins, championships, etc. If someone is down, you find a way to pick them up, you work through it. Talk it out, work it out. That’s friendship through hockey,” Benz said. “At the end of the day, you may be mad at someone for five minutes, but (teammates) know that you have their back and they have yours, through whatever it takes.”

Hockey friendships are not always immediate. Take, for instance, Benz, Brian Farley and Alex Merkle. Benz played at GBS; Farley and Merkle were teammates at Loyola Gold, and a year older academically than Benz, not to mention long-time on-ice rivals.

“If I was 18 (years-old) and asked if I would be friends with Brian Farley and Alex Merkle, I would say, ‘Absolutely not,’” Benz said.

But all landed at Indiana University, where they were teammates and roommates – and their friendship quickly grew, despite the bitter battles between the Titans and the Ramblers.

Farley was the best-man in Benz’ wedding.

Benz was the best-man in Farley’s wedding.

Merkle and Benz were in each other’s wedding parties.

Hockey friendship also often cross age-differences, too. Benz, for instance, skated youth hockey in Glenview and at GBS for current GBS head coach Jim Philbin. Benz also has coached alongside Philbin – and Philbin was one of the first who Benz contacted when he wanted to transition into coaching.

Today, Benz and Philbin are rivals during the game, but before and after every game they exchange handshakes and hugs.

The hockey friendship path also has led Benz to hire former players he coached who now are breaking into coaching, such as Will Huber, now in the Wilmette youth program.

It’s often said, and so true, hockey is a family – with amazing, long-time friendships on and off the ice.