Saint Ignatius JV Team is Back! 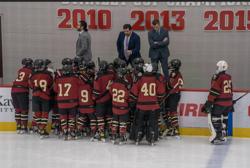 The Saint Ignatius JV Hockey Team is officially returning to the ice on Sunday, January 15, continuing its pursuit of a third consecutive DiCristina Cup championship and, most importantly for this team and the entire school, it is slowly skating past one of the darkest moments Illinois hockey has ever endured.

The team was involved in a horrific traffic accident last Nov. 12 while returning to its hotel in Warsaw, Ind., after playing the first of two nonconference games against Culver Military Academy. A semitruck ran a red light and plowed into their team bus, filled with 23 students, two coaches and the driver. All were injured, three students were taken in critical condition to Fort Wayne Lutheran Hospital.

“Everyone is handling their injuries (per) their doctors’ advice,” said Saint Ignatius JV head coach Mike Rigitano. “Everyone is progressing in a positive direction.”

So, skating in a game, one that matters, is the next stride for these teenage warriors who faced death head-on – and now just want to play hockey and, somehow, forget the nightmare.

They were seconds away from their hotel, about to take a left turn, with their hotel “about half a football field away,” recalled Rigitano, who was seated two or three rows behind the driver, while assistant coach Ryan Haraldsen was on the other side of the aisle, a row in front of Rigitano. They were returning to their hotel, where pizza and salad was waiting for them.

All the students were, naturally, seated behind their coaches.

“We saw the semitruck coming (at us) head-on. We thought for a split second that the truck was going to miss us,” Rigitano said. “As we braced for impact, everything went dead silent, things started moving in slow motion. When impact happened, everything went back (to real time).

It was a nightmare, period.

The truck hit the bus, pushing it on its side. Haraldsen landed in the seat a row behind Rigitano.

“Inside the bus, it looked like a bomb went off – debris (was) everywhere, glass, blood, bodies,” Rigitano said.

The coaches confirmed they were OK, then started attending to the kids.

Rigitano took the kids from the front and middle of the bus; Haraldsen went to the back of the bus.

Everyone went to the hospital, which is where parents met their loved ones.

The parents were out to dinner and had just sat down, ordered their meals – and then their phones started blowing up. Immediately, they left for the hospital.

Two players were transferred to a trauma center in Fort Wayne, and a third was sent their too due to the severity of their injuries.

“It still feels surreal, like a dream. It’s one of those things that you don’t think will ever happen to you. Then it does,” Rigitano said. “This was a life-changing event – for everyone.”

Skating on Sunday, January 15 – against Marmion Academy, starting at 6:30 p.m., at Fifth Third Arena in downtown Chicago – is their next major, and most exciting step, on the path to recovery.

“The way that these kids have bounced back has been unbelievable,” Rigitano said.

Most of the students were released from the hospital that night, though some had to stay.

Three students had their season ended that night in November due to the injuries they suffered – for this season, at least. But they still come to the rink, hang out at practice, in the locker room with the team. They will be cheering as loud as anyone when this Wolfpack crew returns to game action.

“It was always a goal of everyone – to be back, to be competitive,” Rigitano said. “We have not lost sight of winning our third (DiCristina Cup) in a row. It’s been our goal, and still is. That has not changed.”

They are just taking an unforeseen path to the playoffs.

This experience “brought them a lot closer, made that bond a lot stronger for, Our Family. We will not take things for granted, ever,” Rigitano said. “The silver lining is, just that we are all still here, that there were no fatalities. And we’re coming back to finish what we started.

“It would and could be a Cinderella story; that’s what we’re hoping for.”

Rigitano said emotions have been good building up to the return of league play. The club, school and whole community have been supportive, he said.

Well-wishes and prayers came from all over the U.S. and abroad. 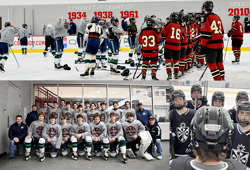 Illinois’ hockey community was, of course, extra supportive for this Wolfpack Strong campaign. Fenwick, for one, wore stickers on their helmets in support. Notre Dame made Wolfpack Strong jersey which the Dons’ varsity team wore in a game against Saint Ignatius, and then donated to their foes.

“The group of varsity parents came together, with help from (the Notre Dame College Prep hockey club board and JV parents), and we (made) the jerseys and then (donated) them over to the Saint Ignatius players, and (everyone) joined in a prayer circle,” said Mike Silenzi, Notre Dame varsity head coach and the club’s director of hockey operations.

“It was truly a heartwarming event. My boys were all for it and handled themselves like gentleman.”

Saint Ignatius maintained its JV ice slot over the past two months, so players can reunite, be in a safe space, where they can be themselves and have the comfort of their friends, their team, their family. Practice gave the youngsters an outlet to let loose, Rigitano said. The team held casual stick and puck practices, no structure, just fun.

Now, though, they are getting back to business. “They are motivated, hungry. They want to show who they were,” said Rigitano, who noted that all his players are “making progress in a positive way; their spirits are up.

“It’s been huge having the most seriously injuries boys (at least attend) practice. Whether that was on crutches, in a wheelchair, etc. The boys lit up when they saw those teammates at the rink. Those three (critically injured) players, did wonders, brought smiles. That really helped the healing.”

Saint Ignatius will honor the First Responders from Indiana who aided them before the Sunday game, including a ceremonial puck drop. “We just want to give back, thank them for everything they did for us,” Rigitano said.