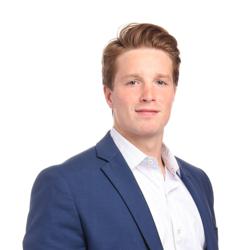 Matt Hanewell, a forward who mostly plays left wing, was a 2015 Illinois State Champion for the Chicago Bruins in a local career that also included time skating for the Glen Ellyn Flames and Chicago Young Americans before graduating from Glenbard East High School in 2016.

Now 24, Hanewell is a senior playing for the Milwaukee School of Engineering, pushing toward a leadership role for a construction firm after graduation. He also thinks purchasing real estate around the U.S. and eventually build a large portfolio.

Hockey always will be part of his life, including the biggest on-ice moment of his career. He will represent Illinois, one of three with ties to the Land of Lincoln, on Team USA in the 31st FISU World University Games, which will be held in Lake Placid, N.Y. in January.

“I’m honored to represent my country (on the) world stage. I can’t thank my family, friends and coaches enough for always supporting me and allowing to me to get this great opportunity. I’ve heard there’s no other feeling like playing for your country, so I can’t wait to experience it,” Hanewell said. “Although it’s going to be super fun and exciting, I want to win. I’m sure everyone on the team feels the same, too.

“We’re going there to win a medal and we expect nothing less. Anything less (than winning a medal) is unacceptable. We obviously want to put NCAA DIII (hockey) on the map.”

The men’s tournament will have 12 teams, with the preliminary round featuring two pools of six teams each, with the top 2 finishers in each pool advancing to the playoffs. 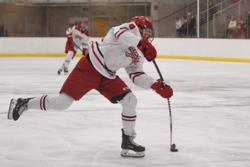 The women’s tournament will have six teams competing in a round robin to advance four teams to the playoffs.

The men’s gold medal game is schedule for Jan. 22, while the champion in the women’s tournament will be crowned a day earlier.

The Team USA men will be skating on home ice in the World University Games for the first time in more than 50 years. The Americans are the No. 6-seeded team and they open action against 10th-seed Great Britain on Jan. 11 at Clarkson University’s Cheel Arena, the day before the opening ceremony for the Games.

“It’s pretty easy to say that the goal for these Games is to bring home a gold medal,” said Jack Jaunich, 24, a senior at Aurora University who has plenty of past memories skating against foes for Team Illinois and the Chicago Mission, among other local top-tier teams. “With the Games being (held) in Lake Placid, it almost feels like ‘Miracle on Ice,’ and I’m sure it won’t be difficult for guys to get behind what we’re trying to accomplish.”

Team USA also features junior forward Quinn Green, from West Chicago and St. Charles East High School. Green is in his second season skating for the University of Wisconsin-Eau Claire, where he has 6 goals, 7 assists in 12 games played this season. A year ago, in 30 games, Green had 9 goals, 5 assists.

Green will be joined on Team USA by Blugold teammate Connor Szmul, also a junior forward. Plus, their college head coach Matt Loen is the associate head coach for Team USA, leading the 23-player roster.

“Aurora University has been such a driving force in my personal development and couldn’t be more grateful for the experience I’ve had there. With my dad’s family being from Lincolnwood and him attending Loyola Academy, it has been nice to have them close by for support through my time at Aurora. It really is a great honor and a privilege to represent Aurora and the country at an international event.”

The U.S. is seeking its first FISU Games medal since 1972, when the U.S. didn’t win a game but won bronze in a field of just three teams that included the Soviet Union and Canada. That was the last time the FISU Winter Games were contested on American soil, also in Lake Placid. The U.S.’s best finish since then was fourth in both 1989 and 2013. Lake Placid 2023 is the first time the winter edition of the FISU Games has been held since the 2019 Games in Krasnoyarsk, Russia. The 2021 FISU Games, set for Switzerland, were canceled due to the worldwide pandemic.

The U.S. Women’s team is the No. 2 seed in a six-team tournament and on home ice for the first time since women’s hockey made its FISU World University Games debut in 2009. The U.S. team’s best results have been bronze medals in 2013 and 2017.

Jaunich, from White Bear Lake, Minn., will graduate with a degree in actuarial science and finance. He wants to become an actuary or financial advisor. “Coaches have described me as playing with lots of speed and stickhandling well around the net. I believe the common theme of our team is going to be playing fast and taking time and space away from others,” he said.

Hanewell plays a fast and physical game. “I try to use my speed every chance I get, which is usually carrying the puck wide and driving hard to the net to produce offense. I also like using my quick cutbacks to create space in the offensive zone and either look to shoot or pass to someone in a good scoring position,” he said. “Physically, I like to use my size and speed to hit, giving me and my team some energy.

Illinois hockey gave Hanewell the exposure he needed to skate at the college level.

“Playing club hockey opened a lot of doors because of all the travel we did,” Hanewell said. “The quality of coaches also played a major impact. At least the clubs I played for, (they) always had top tier coaches with hockey backgrounds and impressive resumes.”