Morgan is leader on, off the ice for Waubonsie JV Team 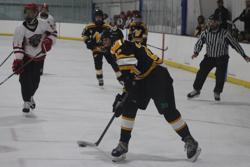 Morgan, though, didn’t harp the disappointment. Instead, he was motivated for a solid JV season.

Morgan, 16, a junior who attends Metea Valley High School, has been the JV team leader, playing on the powerplay and penalty kill units – and he was voted team captain, which he acknowledged is “a huge honor.”

“I am not a vocal leader, but I try to lead by example,” said Morgan, who lives in Aurora. “I try to work hard and always be positive. I also try to lift up my teammates, especially if their heads are down and (I) may even take a few penalties for defending my guys.”

Waubonsie JV head coach Jake Jauch said Morgan has been a hard-working and reliable player all season, as Waubonsie sits at 5-8-2 in the IHSHL West Division, now led by Naperville Central. “He has embraced his role as our captain and has been a leader both on and off the ice,” Jauch said. “Andrew is a player who we can put in any scenario or situation throughout a game and know that he will give us 110 percent effort and succeed.”

Morgan, wearing jersey No. 20, has been playing for 10 years – and he scored a goal in his first-ever game. “I’ve seen the video and remember seeing me waddling back and forth in excitement after the goal,” he said, laughing.

Morgan is developed into a hard-nosed player, a grinder who is not flashy, but always works hard at both ends of the ice.

“I’m not very big, but I’m not afraid to throw my body around as needed,” said Morgan, who praised all his past coaches. “I’ve been very fortunate to play for great coaches from mite hockey all the way through high school. I try to take as much knowledge as I can from each one.”

Morgan said his favorite high school memory was winning the spring league title during his first season with the Warriors. He also won the NIHL Gold Wolves Cup as a squirt, playing for the Sabres.

Best Hockey Tip: “Body!” Meaning, play the body, not the puck. – From the Waubonsie coaches.

Teammate Who You Can See As A Hockey Coach: Shane Stanuszek

Combined Division Team: “For the most part, I’ve known quite a few of my teammates from club hockey. Waubonsie and Metea are pretty close in general, so my circle of friends attend both schools. Playing in Illinois West is great because I get to play against a lot of my former teammates from Sabres.”

Away From Hockey: “I play golf, hang with friends and play video games.”

Little-Known Facts: “I have two golden doodles at home, and I can wiggle my ears.”

Season Goals: “My team goal this year is to win our division; my personal goal is to try and lead as best I can and average a point a game.”