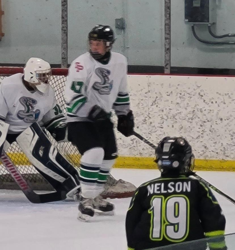 Joseph Bollentino, a sophomore for the co-op Cobras JV Team, brings a bit of his beloved Chicago Cubs to the ice. He wears uniform No. 47 since his two favorite Cubs were Anthony Rizzo (No. 44) and Kris Bryant (No. 17).

“My number is a mix of theirs,” said Bollentino, who lives in Tinley Park and attends Tinley Park High School – one of six schools that build the Cobras, along with Andrew, Homewood-Flossmoor, Oak Lawn, Shephard and Stagg High Schools.

Bollentino started playing when he was 7 for the Homewood-Flossmoor Vikings, where he stayed for five seasons before jumping to the St. Jude for travel hockey. He is now in his first season with the Cobras, playing in the 16-team IHSHL West Division. The Cobras are 3-12.

Still, he is happy with his club.

“So far it's been really fun and my teammates and coaches have been amazing; (they) made me feel like I was part of their family in no time,” said Bollentino, a playmaking defenseman who also, at times, serves as the team’s enforcer.

“(The biggest) influence throughout my hockey career has been Alex Ovechkin, because he’s my favorite player to watch when he’s ripping one-timers from the top of the circles. I try to shoot just like him because of the power and speed he has on his shots. I also liked to watch Zdeno Chara because of how physical of a player he was.

“My favorite hockey memory was when I was playing (for) HF Vikings and we played at Compton Ice Arena, the University of Notre Dame’s home ice, and then later that night we were lucky enough to get tickets to watch Notre Dame play Penn State in the BIG 10 Championship.”

Best Hockey Tip: “'If you make a mistake, don’t hang your head about it; instead, learn from it.” – from Joseph Bollentino’s dad.

Teammate Who You Could See As A Hockey Coach: Nolan Morrissey

Team Player: “I always have a positive influence and always go 100 percent on every drill in practice and every shift in games.”

Combined Division Team: “It’s a lot of fun playing for a combined hockey team with several different schools playing for one team because you get to meet more people than you would, if playing for a true team, representing one school. It takes school spirit to a different level as we now have fans cheering us from multiple schools.  It is cool to play with friends who are normally our rivals in other sports.”

Friendships: “I have made many friends through hockey who go to different schools, and some I’ve played with for almost five seasons. They have basically become my brothers because we always have each other’s backs on and off the ice.”

Away From Hockey: “I like to hang out with my friends and family, and I play baseball for the JV Team at Tinley Park and a travel team, too. I also like to workout at the gym or play video games.”

Little-Known Fact: “I like to build Legos. I am a big fan of Star Wars Legos and have built several battleships and my favorite was the giant Millennium Falcon.”