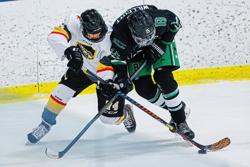 Oleksandr (Sasha) Khabenyuk is a 3-year center for co-op BG/H/W, a playmaker who is doing exactly what his parents pushed.

“They always encouraged me to keep practicing and trying new stuff,” said Khabenyuk, 17, who lives in Mount Prospect and is a senior at Hersey High School in Arlington Heights.

He wears uniform No. 74 and formerly skated for the Skokie Flyers and Northwest Chargers.

“I bring a positive attitude to the team and encourage everyone to play well … as well as make some jokes to get people laughing,” Khabenyuk said. “It’s been a bit rough so far this season. We’ve lost to some teams we shouldn’t have and beat some teams that people thought we couldn’t.”

The Stampede stand at 9-5-5 (7th place) in the 15-team Champions League of the IHSHL North-Central Division. Their 3-1 win over Evanston on Wednesday, Dec. 14 marked the team’s fifth league win in its last six games. Their lone loss in that stretch was 3-1 to Glenbrook North Gold.

“I’ve been playing pretty well and giving opportunities to my team to win games as well as playing well defensively,” Khabenyuk said.

Hockey, though, isn’t his lone struggle these days. He is, after all, Ukrainian, so he endures the real-world conflict in his native country.

“I’m Ukrainian and speak the language at home and have many family friends who also speak,” the language, he said. “I (was born) in Ukraine and moved here when I was 2 years old.”

The current conflict in the Ukraine is “affecting me in a pretty harsh way,” he said. “It’s hard to see what is happening in my home country. At least I can say my family back in Ukraine is safe.”

Khabenyuk is undecided on his college plans, though he wants to attend a 4-year college and plans to pursue a degree in computer science.

Highlight So Far This Season: “Tournaments with the boys. It’s been a blast being with the team and just having a good time.”

Away From Hockey: “I like to go out with friends, and I really enjoy going to the gym almost every day, where I stretch and work on gaining strength and building muscle.”

Little-Known Fact: “I played the viola when I was starting middle school.”

Best Hockey Tip: “Stay low when taking a face off.”

Teammate Who You Could See As A Hockey Coach: Anthony DaSilva