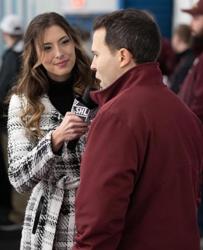 Loyola Gold was handling host Glenbrook North on November 2nd when the teams battled for the second time in a 5-day stretch, as the Ramblers built a 5-2 lead after two periods.

The Spartans, though, never waved the white flag:

Two overtime periods could not land a victor. That led to the shootout round – and a goal by Ryan Sandler proved to be the game-winning goal for the green and gold Spartans.

Hockey fans overall rejoiced, a classic moment in Illinois high school hockey history had been seen – on the Scholastic Hockey League (SHL) Network, a trailblazing multi-media outlet with a home on YouTube.

“The players and the quality of the hockey is the reason why The SHL Network has worked. Add in the rivalries and the competitive nature of the league, with everyone beating everyone (this season), fans get to see intense, quality hockey on almost every broadcast,” said GBN head coach Evan Poulakidas, who also is the SHL commissioner. “From the first telecast (years ago) to (the latest) broadcast, it is like night and day; it’s like comparing today’s 4K televisions to black-and-white televisions (of year’s past)."

“Our broadcasts are staffed with professional broadcasters, so you get a true feel for what is really taking place (on the ice). The cameras used (for the broadcasts) are high-definition cameras, which really allows the viewer to see the game.”

The SHL Network, much like the teams it covers, spent this past summer improving, upgrading equipment, recruiting new broadcasters and hiring videographers and technicians. Their goal is simple, beside spotlighting the league’s best goals: creating the best viewing experience for SHL fans. 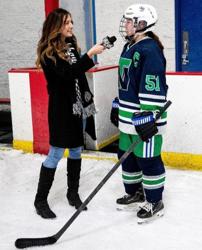 In doing so, The SHL Network has taken Illinois high school hockey to a new level, with international viewers, as games, highlights, stats and more are now available worldwide, thanks to YouTube, Twitter, etc.

This is year six for the SHL Game of the Week broadcast crew, featuring the duo of Max Anderson and Jimmy Olson. These are, without question, the best broadcasts – from an on-ice playing perspective and a technical side of the broadcast. There are, for instance, more in-game graphics, plus time clocks, exceptional intermission content and more.

“The goal (this season) for The SHL Network was to gain even more views then the 110,000 we had for last year,” Poulakidas said. “To eclipse this mark we added goal cams, a three-man broadcast (team) for every game and additional graphics. To make the SHL telecast as professional as possible, the work of Max Anderson and Jimmy Olson cannot be underestimated. They do all the behind the scenes work and quite frankly when they walk into a rink, people now know that a big game is being played.”

“The addition of the goal cameras, and an extra camera at times, has really made the broadcast come to life,” Poulakidas said.

“It is expensive to (broadcast) these games at the level we broadcast. Our sponsors have been great, but to grow the Network with additional games, we need to secure additional sponsors,” Poulakidas said. Uline is the presenting sponsor of The SHL Network. “The goal would be to expand the number of (games) broadcast, now at 14 per year plus the finals of the Loyola Thanksgiving Tournament, SHL playoffs and state tournament games, thus, about 25 games.”

The SHL Network will be the broadcast home for this season’s inaugural SHL/CCHL All-Star Game on Friday night, December 30, at the Allstate Arena in Rosemont, pitting top players from the Scholastic Hockey League against some of the best from the Chicago Catholic Hockey League. The showcase event also will feature a skills competition between SHL and CCHL players, including a 4-person speed race and a 4-person shootout.

The Wolves battle the Rockford Icehogs, starting at 7 p.m., on Dec. 30.

“The SHL/CCHL All-Star Game is one that many have wanted to see for years, and truly is a group effort (between) the SHL, CCHL and Wolves,” Poulakidas said.

The winning league will claim the “Old Wooden Skates Trophy.”

Poulakidas confirmed that SHL Network personnel have discussed additional showcase games to further expand the sport, such as, an Illinois vs. Wisconsin All-Star Game of high school players.

“It’s a ton of work to put on this type of game, but we certainly can dream,” he said.

Max Anderson and Jimmy Olson have a small, but skilled team helping with The SHL Network, which is now at about 10 people.

“When deciding the yearly broadcast, we look at the schedule and try to get the most competitive games on the list,” Poulakidas said. “There are rivalry games that we cover, but I never worry about any team playing on the Network because the players know it’s special night similar to Monday Night Football.”

Poulakidas praised Anderson and Olson as “the backbone” to the growth of The SHL Network. “They have worked to create something very unique,” he said. “Max is a terrific broadcaster. I listen to him and wonder when will another network, such as the Big Ten, pick him up; I do worry about that. Jimmy Olson (brings) exceptional engineering capabilities that have surpassed anything I could have imagined since the Network started. He has done a remarkable job and I hope the players understand how much work goes into this.”

The SHL Network publishes regular Power Rankings of the varsity teams, along with a solid social media presence for the league. Poulakidas admitted that the Power Rankings “bring more excitement, controversy and exposure to the league.”

“I believe The SHL Network has helped create an aura around the SHL and when you see people watching SHL games from around the world, as we do, you know in your heart that The SHL Network is achieving success that I never thought possible,” Poulakidas said.