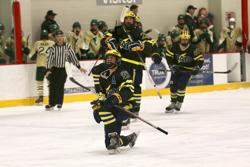 Ending the 15-year draught was a “dream come true” for Glenbrook South junior Zack Freimuth, who is now looking to change the Titan mantra to ‘back-to-back.’

For decades, Glenbrook South has played host to arch-rival Glenbrook North on the night before Thanksgiving at the Glenview Ice Arena, with a wild, raucous crowd overflowing the north suburban rink with families, friends and fans aligned with both schools. Though a home game for the Titans, North has for years dominated the battle.

The Spartans’ streak ended in 2021, when the Titans triumphed, 3-1, ironically in a pre-Thanksgiving battle played in Wilmette as the Glenview rink was being renovated.

“Growing up, I loved attending the North-South games. I have been there every year since I was 10,” said Freimuth, 16, who lives in Glenview. “I fell in love with the atmosphere surrounding (that) game. I remember idolizing the style of play of Joe Emme, Ben Thomas and Theo Papalas – some of South’s recent stars. I looked forward to the year I would get to hear my name announced and skate out in front of a packed arena. Even though I didn’t get the opportunity as a freshman, I’m incredibly grateful for the experience as a sophomore. The entire night was a dream come true.”

The entire day was a Titan memory, starting with a light morning skate that Wednesday in late-November 2021. South then, as a team, ate breakfast together. “We were all excited and anxious, and I think being together that morning brought the team a little closer,” Freimuth said. “The entire team played great that night and there were plenty of great moments throughout the game. My favorite of the night was celebrating on the ice after the win. All the alumni came out, some of whom were past teammates from my freshman season.

“Celebrating that win with my current and past teammates was a special moment.”

The rematch is circled on everyone’s calendar – everyone associated with both North and South. That Wednesday night, November 23, is now only weeks away.

The Titans not only won the 2021 Thanksgiving rivalry game, but they all swept all three games over the Spartans last season.

No one on North or South has forgotten that fact.

“The Thanksgiving win was sweet, but the (series) sweep was sweeter,” Freimuth said. “We beat them on their senior night, which was awesome and sent the message that the Thanksgiving win wasn’t a fluke. Game Three (of the 2021-22 season series) was played (in Northbrook) and (yet) our stands were more packed than theirs.

“Capping off the sweep was a great moment because GBS had been beating GBN across all sports all year. It was our job to continue that success.”

Freimuth, in uniform No. 81, has skated for the Glenview Stars and Winnetka Warriors – all dating back to Mite 3 for the Stars, where he then, in his first season on skates, was teammates with “a bunch of my buddies who I’m still friends with today,” he said.

He also in year one of his hockey career, and many other following seasons, learned under longtime Glenview coach Sylvain Turcotte, famous for always telling his players to “bury the biscuit in the basket” before every game.

“Coach Sylvain taught me how to skate when I was 3-years-old,” Freimuth said. “I was bad at the start, but he encouraged me to keep working, and even trained me privately off to the side while all the other kids were skating circles around me.

“I wouldn’t be playing hockey today if it wasn’t for Coach Sylvain, and for that I’m forever grateful.”

“I owe a ton of gratitude to Coach Philbin, who also coached me when I was 10, playing for the Glenview Stars. I’m honored to have the opportunity to play for him at Glenbrook South. Not only has he developed me as a player, but he has also exemplified the type of leader I want to become. He has taught me that South Hockey is bigger than games, bigger than wins, and bigger than championships. It’s about creating a family and a brotherhood that lasts a lifetime.

“I’m also extremely thankful for Coach Philbin Jr., who has taken an extensive amount of time to develop me into the forward I am today. As a freshman, I was converted to a forward after playing defense since I was 8 years old. Coach Philbin Jr. took me under his wing and taught me many skills that have taken my game to a new level.”

“I typically find success in quick transitions with lots of passing. I’m also an extremely competitive player who works hard every shift,” he said.

The Titans opened SHL play with a 3-2 road win over York. Freimuth scored South’s first goal of the game as GBS trailed 2-0 before the junior tallied on assists from Owen Almburg and Kacper Wojdyla.

Freimuth’s experience is already showing and providing needed guidance this season, so far, for South.

“I know how it feels to be a freshman in a big game. I know how it feels to be relied on in a pressure situation. I also know the heartbreak that occurs when a season ends and you must watch the seniors leave the ice in tears,” Freimuth said. “I’ve seen the positives and negatives of playing varsity hockey, and it’s my job to use that experience to lead my teammates in the best way possible.

“Any of my current or past teammates will say I’m not the most vocal leader. I like to show my leadership through example. I think showing hustle, effort, and hard work goes a lot farther than saying it. The great thing about this team is we have a bunch of leaders. Some who are more vocal, some who lead like me. We all use our strengths to benefit this team, and I love that.”

So how far can South go this season?

Is a return to the United Center possible?

The Titans are a deep team with a variety of talent on all lines.

“We’re a tight group with many of us having been friends and teammates for a long time. If we stay healthy, we have a great shot at making a run this year,” Freimuth said.

Freimuth couples his hockey skills with baseball, and he expects to play on South’s varsity baseball team in the spring, as an outfielder.

“Baseball and hockey surprisingly complement each other,” Freimuth said. “The biggest area is in hand-to-eye coordination. Both sports require a high level of coordination, which I found improves my skills and overall athleticism. In addition, the strategic and intellectual aspects of baseball help my vision and awareness on the ice.”

Freimuth also is in his first year on student council. He was elected last spring to be a vice president for the junior class. “I’ve really enjoyed it so far. We plan events, such as, homecoming, prom and the spring dance, while also organizing events that give back to the community, such as a canned food drive.

Away From Hockey: “Golf is a big hobby for me in the offseason. Whether it’s practicing, playing, or just messing around, I love being on the course. I think the hip rotation in a hockey shot helps my swing because I’ve always been able to get a lot of power and club speed in golf. A lot of my friends are great golfers, so it’s fun to compete and try to keep up with them. I also love playing with my dad. This past summer, I played in the Junior Club Championship at Twin Orchard Country Club and shot an 80 to take 3rd-place. That was the greatest golf moment of my life so far.”

Helping Hockey: “I take a comprehensive approach to hockey. I pay close attention to the foods I eat, the amount I sleep (I get) and the substances that go into my body.”

In Training: “I have been training at Tactic Sports Performance for 6 years now. The trainers do a great job of creating workout plans that fit hockey players. We do a lot of explosive work and lower body exercises that help my quickness on the ice. I also love studying the game by watching film an NHL games. Tying all these elements together lays the foundation for my improvement as a hockey player.”

Little-known Fact: “I’m a big country music fan. I love all kinds of music, but country is by far my favorite. My favorite artist is Luke Combs, followed closely by Morgan.”

Best Hockey Tip: “A big hit, sweet goal, or fight might get the crowd riled up, but the loudest cheer you’ll get is after a win. – Coach Jim Philbin

Teammate Who You Could See As A Hockey Coach: Owen Almburg

Most Accurate Shot on Your Team: Wyatt Sherwood

Defeating GBN In The Pre-Thanksgiving Game 2021: “Hearing that buzzer and celebrating with my teammates in front of 1,200-plus fans is a moment I’ll never forget.”