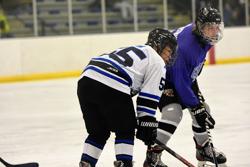 Izumi, 17, who lives in South Elgin and is a senior at St. Charles North High School, is now skating in a new roll for the Hawks, as a center in the 9-team Varsity Gold League of the IHSHL North-Central Division.

“I feel I have more insight and wisdom about other teams, the league, and the style of play our coach is trying to implement,” Izumi said. “Being one of three returning players from last year, I know a lot more about the team, the organization, and varsity hockey in general. I feel that I can use my knowledge to help our team understand what our coach and the organization is trying to do. This year we are all about focusing on the positives, which is one thing that I am really trying to push (to) the underclassmen.”

Said Fox Valley head coach Phil Gabrielsen: “Ethan is a Fox Valley Hawk and is committed to the success of the team. He works hard every shift in practices and games. He is one of three returning players from last year’s varsity team and is handling it great. He is stepping up as a leader on and off the ice, understands the coaches’ philosophy, goals, and objectives for this year’s team.”

Izumi, wearing uniform No. 55, formerly skated for the Hoffman Estates Timberwolves and the Geneva Cyclones. He is a playmaker with a pass-first approach. He also isn’t afraid to dig in and play a little physically. “I’ve always been one of the smaller guys on my team, but I try to play big,” he said.

“Although we play in a combined league, it doesn’t feel like we are a combined team. We have kids on our team from five different schools, yet it feels like one team. Being a “combined team” hasn’t affected my experience playing high school hockey or our ability to play as a team.

“Compared to other sports, hockey feels like a bigger yet closer community. I’m still good friends with a lot of the guys I used to play club hockey with, many of them live in Barrington or Schaumburg. The guys who go to different schools are just as good of friends compared to the guys who go to the same school.”

Izumi said the biggest influence on his career has been his dad. “He not only has financially supported my career, but he has always been there for me. He has always provided me with what I needed to hear rather than what I wanted to hear. He’s committed a significant amount of time to my career, driving me to practices, games and tournaments over the past decade.”

Izumi said he doesn’t remember his first game, but one of his earliest hockey memories was playing on one of those mini training rinks and getting shot in the face by a kid that was a lot bigger than him. “After that, I thought I would never want to play again, but I soon found myself back on the ice.”

One of his career highlights was winning the league championship as a second-year peewee. “Going into the game we were a severe underdog, but in a close game we were able to pull out the win. I can (remember) everything I did that day leading up to the game. It was an awesome way to end the season,” he said.

Izumi is still undecided on his college plans for next year, though he is considering Indiana University, University of Illinois, and the University of Missouri.

Fish Tales: “I spend almost every weekend of every summer in Lake Geneva, fishing with my grandpa, uncle and dad. Similar to when I play hockey, when I am fishing, I’m only focused on what I am doing at the moment which I find to be very relaxing.”

Work World: “Over the past two summers, I (have) worked at the park district pool. A lot of the skills that I learned from working, such as patience, self-awareness and decision-making have helped me become a better teammate and player. I think that not only will these skills help me be a better player, but also more successful in life.”

Little-Known Fact: “I have a twin sister.”

Best Hockey Tip: “I learned from my dad that you should start off with learning and practicing a good stride and skating technique. The best players always have the ‘smoothest’ strides.”

Teammate Who You Could See As A Hockey Coach: Aiden MacRitchie. “He’s a three-year varsity player, the most social and outgoing guy on our team. He also knows a lot about the game and has a lot of connections in the hockey world. With his personality and knowledge, I would imagine he would be a great coach.”