IHSHL North-Central Division ‘caters to all levels of play’ 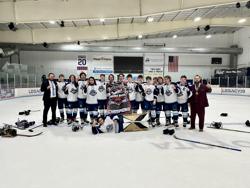 Co-op PREP has been near-perfect this season in the Champions League of the IHSHL North-Central Division, most recently skating past New Trier White 4-2 on Saturday, Nov. 12, in Mount Prospect.

PREP trailed 1-0 after the first period but answered with four straight goals. William Behls led PREP with one goal and two assists, while Nicholas Lamberg chipped in a goal and an assist, including the game-winner.

PREP has been a dominant force in the 15-team Champions League, with a league-high 65 goals scored (in 15 games) and 22 goals-against, which ranks second behind New Trier Blue (20) in goals-allowed, and the Trevians have played three fewer games so far. 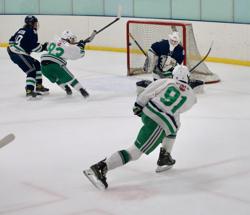 “The season is already a success … we have over 1,000 playing our great game,” said first-year North-Central commissioner Jack Raslawski.

North-Central is a powerhouse in Illinois, with 24 varsity teams and 36 JV teams – both totals are the most of any Division in the state. There are about 390 varsity players in North-Central and about 615 at the JV level.

“The (IHSHL Hayes) Suburban League folded (after last season) and between the West and our league we were able to accept all their teams. I know there are a few that don’t believe in the combined team concept, but this allows many players to play the game from schools that can’t field pure teams,” Raslawski said. “Thankfully we have many individuals who run the 29 organizations, allowing these players a team to play for.

North-Central was formed years ago, meshing what was Metro North and Metro Central. Bob Wagner, longtime head coach at BG/H/W, was the league’s first commissioner – and Raslawski said much of North-Central success is attributed to Wagner.

“Bob ran a strict league, (with) levels (of play) for all teams,” Raslawski said. “When I was asked to run the league (starting this season), Bob indicated it was like herding cats and he wasn’t kidding. Mondays and Fridays are the worst. Monday, all the referee game reports come in from the weekend on players or teams that acted up. Fridays are a little more stressful due to all the games that don’t have assigned officials.” 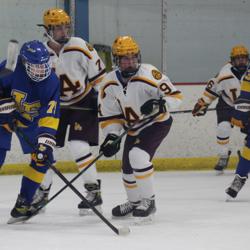 So far, North-Central has not had to cancel a game due to the lack of officials. “We’ve only had a handful of games with one official and that’s a huge improvement from last season,” Raslawski said.

The top-tiered Champions League features the Ice Cats, New Trier Blue and New Trier White, Evanston, Deerfield, Chicago North and others – and at least the aforementioned six could stop PREP’s path to a league championship.

The 9-team Gold League features the D155 Predators and D211 Chiefs, plus the Renegades, Yeti and Lakers, among others.

Raslawski said North-Central’s goal for this season is very simple: allow an option for players to play.

“Our league caters to all levels of play,” including three JV, even one for new skaters. “You want to play hockey … we have a place for you to play.”

North-Central raised the pay for on-ice officials this past season – and varsity games carry 15-minute periods and no overtime.

“Ideally, we’d like the numbers to stay the same (in the coming years), but there will always be changes,” Raslawski said.

North-Central implemented a new scoresheet platform this season, and that’s been a challenge, he admitted. “Unlike other leagues that have dedicated scoreboard operators, we have (parents) working the clock and scoresheet. These moms and dads don’t know a trip, hook or misconduct, (nor) how much time each penalty carries. Second, all they want to do is watch their kids play. Hopefully things will get better with this program.”

Raslawski brings extensive local hockey experience to the position, primarily as an on-ice official. He has 44 years of experience in a black and white sweater on-ice and is still whistling games this season.

Raslawski also is the head coach of Chicago Special Hockey, which has programs in Chicago, Glen Ellyn, Orland Park and Rockford. Hockey is for EveryBODY is the catch-phrase for this program – and Raslawski certainly lives the slogan.