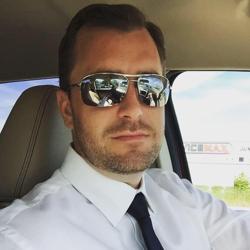 Scott Allord – a local hockey referee for close to 30 years, long known for his smile that would light up a room, or rink – passed away October 27 from liver failure. He was 41.

Allord was one of five area officials in 1991, when he was 10 years-old, who started to officiate games as the local organizers worked to see how to retain young officials. He officiated his last game in 2019, a career that spanned all local youth age-groups, including AAA hockey.

“I learned a lot from him, (especially) how to be kind to people. I really admired the way he approached the game,” said Don Allord, his dad, who was the president of the Illinois Hockey Officials Association (IHOA) for four years and the IHOA referee-in-chief for nine years.

Scott, who lived in Darien, was a salesman for Perma-Seal. He graduated from Downers Grove North High School and, for years, worked and managed several local hockey pro shops. His youth included time skating for the Huskies.

“I remember Scott as a young official, always wanting to do the best job he could to bring integrity to the game,” said Sjoukje Brown, former USA Hockey Central District Referee-in-Chief. “He knew the rules and how to apply them in the fairest way possible.

“One of my favorite memories of Scott was the first time he volunteered to help assist in a (pre-season) seminar. We used him as an on-ice assistant, but quickly realized (that) his calm demeanor was also an asset in the classroom. He had a way of talking to young kids who related to him, and (he) engaged them in a learning. Scott became a regular instructor at our seminars, and because of that, a role-model to many young officials.”

Allord was a hockey fan, particularly his beloved Chicago Blackhawks.

“Scott’s perseverance in the face of adversity stood out to me,” Brown said. “He had some health issues off and on, but always seem to maintain a positive attitude and was always willing to overcome whatever obstacles stood in his way. He would patiently wait, do whatever doctors asked him to do, and then move forward to the next step. His incredibly positive attitude and spirit are things that will always resonate with me.”

Allord was an avid golfer and participated in pool events and tournaments.

“Scott showed everyone that, if you work hard, even if given seemingly insurmountable odds, you can do what you set out to do,” Brown said. “He was an inspiration to young officials and brought an incredibly positive attitude to every game he worked.

“Scott will be sorely missed. He is a member of our hockey family who would do whatever he could to help others and give whatever he could to others if he thought that it would help them. Though he faced some adversity in his lifetime, he understood that things should not be taken for granted and that, above all, family is the most important thing.”

Longtime area official Jack Raslawski noted that Don Allord was always proud of his son and “Scott went pretty high in the referee rankings, (which) made Don proud.”

AHAI executive director John Dunne said his memories of Allord are clear: “Scott was everywhere. He was in the rinks, seminars, pro shop and locker rooms. He was a valuable member of the IHOA and AHAI families.”

Allord was “a steady voice, never wavered that much in volume, but his humor, tone and content spoke loudly,” Dunne said. “While his dad (was) involved with IHOA, AHAI and USA Hockey, Scott made his own way by doing the work and spending the time needed to be an official, mentor and seminar instructor.”

Allord replied that the Orland Park pro shop needed to sell more sticks … Allord worked in that pro shop at the time.

“Scott brought long-term dedication to IHOA and the seminars, and was fixture at the south side rinks,” Dunne said. “I will miss him. (We) have lost a good one.”