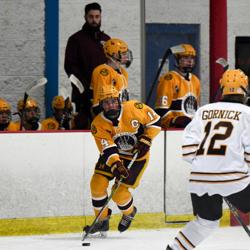 Ryan Cowen was a center in his early hockey years before dropping back to defense five years ago while playing for the Chicago Young Americans.

The past meshing with the present has turned Cowen into, without question, one of the best defensemen in Illinois high school hockey this season.

“I play as a two-way defenseman who can act as a forward at any time anywhere on the ice. I say two-way because I’m not only trying to generate offense; I know I can play lockdown defense in our own zone. But I do (think) my offensive ability is better than my defensive play,” he said.

Cowen, 18, who lives in Glenview, is in his fourth season on Loyola Gold. He was an All-State player last season who also has skated for Team Illinois in the annual America’s Showcase St. Louis this past April, which the locals captured the championship of the 16-team tournament, with Cowen chipping in 6 assists in 6 games.

Wearing uniform No. 14 “because I was 14 years-old when I made Loyola Gold for the first time,” Cowen played for the Glenview Stars and Chicago Bulldogs before landing at CYA.

“My dad is definitely the most influential person in my career,” Cowen said. “He has pushed me to do better in every aspect of the game, having me do private (lessons) and camps and everything you could think of. He would drive me 6-hours every other weekend for tournaments. I wouldn’t be where I am today if not for them.”

Cowen also singled out Lake Forest assistant coach Jimmy Warrick. “I’ve worked with Jimmy for almost 5 years and his coaching tactics have changed my game. I do countless hours of skates with him, and he’s the reason I’m the player I am today.”

Cowen is one of the main reasons the Ramblers are back-to-back Scholastic Hockey League champions – and already talking about winning again.

“Winning the SHL championship in 2022 to go back-to-back,” was a career highlight, he said. “It was a great feeling knowing how hard we worked to achieve one of our preseason goals. Having that trophy in my hands again felt great … I’m hoping to do it for a third time this year.”

There are, though, plenty of obstacles in Loyola’s way, starting with defending state champion Stevenson and Gold’s arch-rival New Trier Green, not to mention Glenbrook North, Glenbrook South and Saint Viator, among others.

“(We) had a team meeting before we started games and we went over (team goals for this season),” Cowen said. “We have a lot of goals to work for. We want to finish the SHL regular season as the No. 1 seed and go on to win the SHL championship again. We also talked about the importance of winning state. I’ve been here for three years and I’ve come up short (in state) every time. This is the year we go all in and hopefully make the run.”

Gold is a strong candidate to skate at the United Center next March.

“I really believe this team can go all the way,” Cowen said. “If we can all come together and figure out who we are as a team, I think we can make it happen. It all starts with effort, and I must be the one to enforce it.”

Cowen is the Gold leader, period.

“I bring a good offensive ability to the team and I’m able to get my forwards points by my style of play. I also have to say leadership (is key) because I was voted captain,” Cowen said. “I take leadership very seriously when it comes to hockey. I’ve been assistant captain on a few teams before so I knew I would want the ‘C’ at Loyola. I try to keep up the morale in the locker room, while still being assertive on how we’re playing. I hold everyone, including myself, accountable for our mistakes. But I won’t ever yell at my teammates for doing something wrong. Constructive criticism works best for us to learn from our mistakes. I just want everyone to work hard every time we’re on the ice so we can succeed.”

The Ramblers rolled over Barrington, 5-1, on October 9, to move their SHL record to 2-2. Their other victory was over Carmel (4-1). Gold has lost to Stevenson and Lake Forest.

Cowen is undecided on his college plans for next year, though he is applying to several Midwest schools, including Miami of Ohio and Dayton. “Wherever I go, I’m hoping to at least play club hockey. I can’t imagine not playing competitive hockey anymore.”

He was All-State as a junior and a member of the Illinois team that won the prestigious America’s Showcase St. Louis last spring.

“Being selected for the All-State Team was an honor, to say the least. I wasn’t really trying to get selected during the season, but it was always in the back of my mind,” Cowen said. “While I’m more focused on the team’s success this year, it would be nice to have the opportunity to play in the All-State game again.

“The Showcase team was a blast for everyone. A few of my teammates were hesitant to go, but I convinced them we’d have a good time. The team AHAI put together was unreal. It was probably the most skilled games I have ever been a part of. The boys on the team all knew the game extremely well, and it showed based on the scores we put up and winning the championship. It was a cool experience getting to know these guys after I had been battling (against) them for eight months. We all got close and still talk today. We had a great time at the rink, hotel and just hanging out. I really hope to get the invite again because I’d love to be a part of a team like that again.” 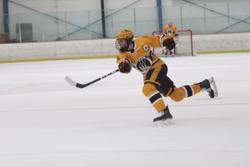 Personal Goals: “I want to finish the season with the most points by a defenseman (in the SHL) again and hopefully win the SHL Player of the Year (award).”

First Game Ever: “I don’t remember too much (about) it, but I remember it being a total blowout. Our coach put in the five-pass rule, (thus) everyone had to touch the puck before we could shoot. I completely forgot about the rule and didn’t pass to anyone and scored. I remember getting yelled at on the bench after that one for sure.”

Off The Ice: “I like working out and watching hockey. I like to learn a lot from NHL games and try to apply what I see from them to my game.”

Little-known Fact: “I played center before I went to CYA. They put me on defense and I loved it, so it’s stuck with me for the last 5 years.”

Favorite Pre-game Meal: Peanut butter and jelly with some apples

Best Hockey Tip: “Don’t be scared. Make plays you don’t think you can because confidence is key in hockey. I learned that from my skills coach Jimmy Warrick.”

Teammate Who You Could See As A Hockey Coach: Bradin Haynie

Best High School Uniforms (other than Loyola): “I hate to say it, but it’s got to be New Trier Green.”