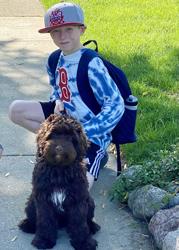 Austin Antell was ready for his first squirt season, as a goalie for the Northwest Chargers’ Central States Squirt Minor club.

But before he faced his first wrist shot of the season, or any opponent on a breakaway, Antell faced a much harder shot: on August 3rd, the 9-year-old Antell was diagnosed with Non-Hodgkin Burkitt B Cell Lymphoma, ironically referred to as NHL cancer.

“Hearing your child has cancer is a parent’s worst nightmare,” said Adam Antell, who has coached multiple levels locally, including high school (formerly at Warren Township) and now, mites. “As with most people who hear the C-word, our minds went to the worst possible place. We were beyond terrified. Austin is our first born, the one who made us a family, and the thought of him being taken away from us was absolutely paralyzing.”

A golf ball-sized lump appeared in his neck overnight, Antell said – but they caught it quickly. “The cancer is limited to his neck and did not have time to travel to any other lymph nodes, his nervous system or his bone marrow,” the nervous dad said. “There are no words to describe the relief we felt when the doctor confirmed the cancer (was) isolated. He assured us Austin will be fine and will be back on the ice in no time.” 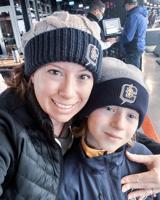 When Adam and Amanda Antell told Austin that he has cancer, the youngster was surprisingly OK, Adam said.

“It was when we told him he was going to be unable to play hockey for a while that he broke down. He specifically asked, ‘How will I do tryouts?’” Antell said. “Austin loves being on the ice more than anything, he says that is where he is happiest and feels the most confident. At that time, we didn’t have enough information to be able to assure him he would be able to play this season; we couldn’t say what he needed to hear to make this horrible situation any easier. All we could do was continue to reassure him that he (was) going to beat this, and his life would go back to normal.”

Austin, a fourth grader at Westgate Elementary School in northwest suburban Arlington Heights, has played the past two seasons for the Chargers. He is now undergoing five cycles of chemotherapy; each treatment is on a 21-day cycle. For each cycle, he must spend a day in the oncology clinic for a 5-hour infusion followed by two nights at home before he gets admitted to the hospital for six days receiving multiple chemo treatments each day.

He also receives a spinal tap on days one and six of each of those hospital stays.

“Austin will not be able to start the season; he won’t be able to play until his port is removed, which hopefully will be by mid-November.”

Doctors have already told the goalie who wears uniform No. 37 that he can play right away following the removal of his port.

“Throughout that first week (of treatment) as we tried to get to the bottom of what was going on, Austin has been so much stronger than we could ever have imagined. He has taken every needle poke; vitals check and surgical procedure in stride. He has maintained a positive attitude overall, with only a few moments of feeling down about his situation,” Antell said.

Austin spent 16 of the first 21 nights in a hospital after the lump was discovered.

“Fortunately, Austin hasn’t experienced any severe side effects of the chemo, aside from a little nausea and some mouth sores,” Antell said. “He did lose his hair, which was by far the most difficult moment for him since his diagnosis. Knowing hair loss is an unavoidable part of this journey, we suggested to Austin that he shave his head shorter to make the loss seem less overwhelming, but he insisted he did not want to buzz his hair. He started losing his hair over the course of his first week home and when he woke up with his pillow covered, he finally decided it was time.”

Austin broke down in tears when he first saw himself without hair. So too did his mom.

“Our hearts broke as he talked about how much (the hair loss) sucks,” she said. “When he said he no longer wants to even look at his own reflection (in the mirror), our hearts (were) shattered.”

The hair loss, they said, was the slapshot to the family that, yes, the youngster “is literally fighting for his life,” she said. “There are no words of comfort that will help to ease his pain. All we can do is hold him, remind him that we love him more than anything, and assure him that this will pass. He will get through this; his hair will grow back, and his life will go back to normal.”

The hockey community across Illinois, not just on his beloved Chargers, has rallied behind Austin, who played two mite seasons for the Chargers – and off the ice enjoys lacrosse, golf, LEGOS, dirt biking, and his favorite subjects in school are PE and math.

“We have been beyond humbled by the amount of support we have received from the Chargers, as well as others in the hockey community,” Adam said. “We have received so many letters of support, calls, texts, and care packages for Austin. When Austin finished his first round of chemo and was released from the hospital, we arrived home to our street lined with players and families … literally, 75-plus people. They all had signs and were banging sticks and cheering for him as we pulled into the driveway.

“Austin and our entire family were so incredibly moved.”

That night, Austin turned to his mom and said, “Mom, I have so many people fighting with me.” 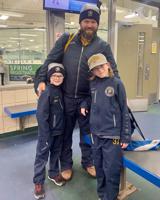 On Sunday, August 28 the Northwest Chargers organization hosted a Shutout Cancer Blood Drive in Austin’s name. “The turnout was beyond what we could have hoped for and because of all the amazing people who came out, enough blood was collected to help 162 patients in need,” Amanda said. “Vitalant, the organization that partnered with the Chargers to collect the blood, said this was the largest collecting drive of the day.

“We believe that so much good can come from even the worst situation. This blood drive is one major good that has come since Austin’s diagnosis, and we are so grateful to the Chargers organization for making it happen.”

Austin has been able to attend school daily when not in the hospital, though his PE involvement and activities during recess have been altered. He also at times is extremely tired and naps more often than in the past. His appetite comes and goes, and he is achy at times from lack of movement.

“After his 5 rounds of chemotherapy the doctors are hopeful (the cancer) will be in remission and able to live his life as a 9-year-old boy should,” Mom said.

To help support Austin, family members created Austin’s Army to help pay-it-forward. Shirts, sweatshirts, tote bags and more are for-sale – and all proceeds will be used to purchase items for the kid’s activity rooms and toys to be handed out to young patients in the hospital. (To order, go to: https://www.bonfire.com/store/austins-army-1/)

“It is Austin’s hope that he can bring some smiles and fun to the other kids who find themselves stuck in the hospital,” Amanda said. “Austin also will be donating funds to St. Jude Hospital for childhood cancer research.”

“Our family (is) honored and again humbled,” for the of support offered Austin by the local hockey community and beyond, Adam said. “We really want everyone to know how incredibly touched we have been by the outpouring of love and support that we have received.”