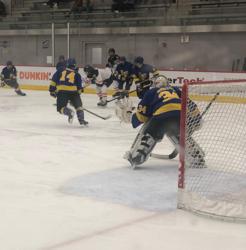 Lake Forest is talent-filled this season. In fact, it’s the highest level of talent that head coach Steve Sarauer has had entering his fifth season on the Scouts bench.

Experience also will be a Lake Forest strength as the club will be returning up to 14 players from a team that went 12-5-5 in the IHSHL Champions Division, 27-13-6 overall.

This also will be a pivotal and certainly challenging season for the Scouts, as they move into the Scholastic Hockey League, without question the state’s top league. LF now must face New Trier Green, Loyola Gold, Glenbrook North, Glenbrook South and others in league play. Oh yeah, the SHL also features defending state champion Stevenson.

“It’s the right time to make the jump into the SHL,” Sarauer said. “Playing with the best in the state will be challenging, but it will make the program stronger and attract more players in the future.

“The players are excited (to play in the SHL); they want to prove that they can be contenders. Most of the players have played with players on other SHL teams prior to high school that are on other north shore, so they’re excited to play at this higher level. The team this season already has the right mindset that they understand that it will need to work as a team to achieve our goals. As individuals they have skill, but there is no one player who we will need to win.”

Sarauer said the decision to leave the North-Central Division was difficult as it’s a league “that is run well and very competitive.”

Lake Forest’s JV2 team will remain in the North-Central Division.

“The move to the SHL was calculated and deliberated for numerous seasons,” Sarauer said. “The SHL Directors were open to discussing our move into the SHL before we submitted our application. Both LFHS and the SHL wanted to be sure that LFHS was a good fit. The last thing any coach wants to do is put their players in a situation where they don’t have the chance to be successful. Although spring (league) is not a true indicator of the fall season of the SHL, participating in the SHL spring for the past two spring seasons gave other programs an opportunity to see our teams for themselves, which showed we could compete. The teams that I have had over the past four seasons have worked hard and paved the way for this move to the SHL and it’s deserved. Now, the 2022-23 team and future Lake Forest teams will need to prove this decision was correct.

“The LFHS board of directors also have been supportive and left the decision completely on my shoulders if we should attempt entry into the SHL. They let me do my job over the past four seasons, provided support when needed, but they’ve stayed out of the way unless asked. The LFHS program has grown and been successful since I’ve started and part of that success comes from the board allowing the decisions relating to hockey to be left to my coaches and myself without any influence. I couldn’t have asked for a better group to be working with.”

Sarauer said the Scouts’ goals for the SHL are to be competitive in every game. “The extra (playing) time in each period will be an adjustment and something that we will really need to get used to,” he said. “This season, our players will be on the ice more and training off the ice more than previous seasons. We understand that there will not be a single win that is guaranteed in the SHL, but that is preferred. I want to go into every game knowing we could walk out losing if we don’t play to the best of our abilities. It will force the best out of us.”

Sarauer added: “We’re a small fish in a big pond; our school (enrollment) is a fourth of New Trier and obviously we can’t recruit outside of LFHS like Loyola or St. Viator, but that has no correlation to how hard we can work and how much the players want to be successful in the SHL. Hopefully we can make some waves and surprise some teams along the way.”

Sarauer said this season’s Scouts are well-rounded, disciplined and can play both ends of the ice well.

Teddy Huddlestun is in goal for the club “and is the true strength of our defensive unit,” Sarauer said. “Teddy has an unbelievable desire to win and a competitive level that I have not seen in many goaltenders.”

Robert Medica is a returning all-state defenseman who is physical, strong on the puck and extremely offensive when he gains control. “His fearless play in the defensive zone with blocking shots and taking hits to make plays is the attitude we will need to stay competitive in SHL games,” Sarauer said.

Sarauer, who lives in Lake Forest, has been coaching for 21 years and has been on the bench for such clubs as the Milwaukee Jr. Admirals, Barrington Broncos, Chicago Mission and Winter Club of Lake Forest.

He led the Barrington High School JV team to two state championships, and the Mission Bantam Major ‘99s to a second-place finish at Nationals.

“Seeing players achieve little things on the ice, get rewarded as individuals and a team because of our coaching is what it’s all about,” Sarauer said.

“This season’s team is quite different than the teams I’ve had in the past. There have always been a few players on each team who really stood out; this season’s team is completely different. We’re not looking at individual stats; the only statistic that matters is wins and losses. We have something to prove; we’ve done well each of the past four seasons in the (North-Central Division) and now it’s expected (to continue in the SHL). But now we’re the underdog and fighting our way in a league with the best in the state.”

“It will be great to put our players to the test right away, time to sink or swim,” said Sarauer, who is joined on the bench by assistant coach Mike McCann, who has been with the club for the past seven seasons “and is one of the best coaches I have come across in 21 years of coaching.”

McCann also is the head coach for the LFHS JV 1 team.

Jimmy Warrick is joining the varsity bench this season as an assistant, primarily working with the defenseman. “Jimmy has experience coaching at the AAA level, Tier 2 level and the junior level, which will be an advantage throughout the season,” Sarauer said.

Warrick also is the head coach for the LFHS JV 2 team.

“Having both coaches of the JV teams at LFHS on the varsity bench allows them to take the systems and strategies to their teams, which will better prepare players for the varsity level,” Sarauer said. “Mike and Jimmy also have extensive playing careers which brings knowledge and experience to the bench.”