The Importance of Playing Time 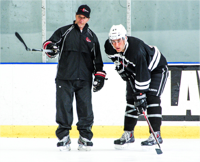 Pelinkovic is content playing for his school’s varsity, wearing the team uniform, with the brilliant logo emblazed on the front. He just doesn’t get as much playing time as he, no doubt, would like or want.

“I might not have as much ice time as others, but I want to make an impact when I can,” he said. “Even the little things help.”

“Getting a lot of ice time, sure, it makes you feel good. But I want to be successful in any shift I have, regardless of how long or how many (in a game) it is,” Pelinkovic said. “The more negative you are on the bench, the worse the (team’s) mood becomes.

“I get to gear up with (my teammates). I get to wear the sweater, the team logo; I have my name on the back of my jersey; I’m on the team – I’m on varsity. There’s nothing I should be upset about,” including playing time.

Pelinkovic is the ultimate optimist, never fretting or complaining about playing time. Team success trumps individual accolades for this 17-year-old who formerly played for the Sabres, Admirals and Hawks, and spent two seasons on the Hinsdale Central JV.

But playing time is the ultimate touchy subject in the sport. Everyone wants “PT” but not everyone can get it. And the higher level a player gets, the more playing time is a subject that easily can divide teams, teammates, friends and parents.

“Our games are not the finals of the Stanley Cup. So we as coaches must put players, all players, in the environment to get better,” said AHAI Coach-in-Chief Jim Clare. “Sure, at the older levels there is a different standard on playing time. There definitely is an accountability for playing time among players, and I’m talking about players at the 14U and older (levels).

“At those higher (aged) levels, it is what I like to call ‘Big Boy and Big Girl Hockey, so the coach is going to do what is best for the team at a certain point in games, especially at the end of the season.”

But all players must see ice. “You pick the kids, you play the kids. If you don’t want to play them, you shouldn’t have picked them,” for the team, Clare said.

Players can’t skate successfully in an environment that they’ve never been in. “If the coach never puts you on the powerplay all season, then how do you expect that kid to play in that situation and be successful?” Clare said.

“My job as the coach is to develop all three lines and all six defensemen, or whatever those exact totals are. If I look at my bench and see who the next three going out (on the ice as forwards) are, but instead, take three others. What message have I said to those three? In a nutshell, I told them, ‘You suck and these three are better.’ If I continue to do that, how can I ever expect those three to perform for the team. Or want to perform for me or the team.”

Playing Time is certainly a delicate balance for coaches.

It’s not a bad idea, for instance, to sit the top line when the team leads by three or four goals, or more, and instead play the third- and fourth-lines more often. You can bet everyone will see that – players and parents alike.

And that can help push and motivate the third- and fourth-line players who often are sitting on the bench instead of skating.

“I tell coaches, ‘I don’t really care if you finish 1-20 or 20-1. The kids who you picked in August, are they better in February and March then they were (at the start of the season)? Have they developed? Are they happy to be playing? Are they excited about hockey? Are they coming back to play next year? Or will they instead hang up their skates and play another sport?

That’s important,” Clare said. “Coaches, parents and kids must understand the importance of practice – your development in the game is much more important than the W that comes with a team victory.”

Jim Swoyer has been coaching for 30-plus years – everything from mites to college, and everything in between. He now is the hockey director and varsity head coach at Hinsdale Central High School.

“You have to remind parents and players that you don’t pay for game time. You pay for practice time,” Swoyer said. “You earn playing time in games; ice time (in games) is earned. You don’t deserve ice time (in games) just because you paid to be on the team.”

Swoyer’s son, Colin, now a senior defenseman at Michigan Tech University, had one of his best seasons when he saw limited playing time. He was a bantam minor for CYA and often had five shifts per game, max.

“He never complained that season,” the elder Swoyer said of his son. “He always went to practice, always wanted to go to practice. That was the year I realized he really loves playing hockey.”

Whenever Hinsdale Central scores this season, if Pelinkovic is on the bench, he turns to his head coach and fist-bumps Swoyer. “He is so incredible,” Swoyer said of his senior forward. “He has embraced hockey as his happy place. He loves being in the locker room; he loves being on the bench; he loves it when he gets out on the ice.”

And when someone asks who scored, Pelinkovic always replies, “Hinsdale scored.”

Pelinkovic is the ultimate team-first player.

“At the end of the days, players like Adam Pelinkovic are why we coach,” Swoyer said.

Swoyer has coached 1,000-plus players over his career, and many have gone on to a professional career. Not a professional hockey career, but a career as a professional. “The lessons they learned on the ice, on the team, in games, in practices, off the ice, and through adversity at times, such as (limited) playing time, that has led to countless success stories (in the real world),” he said. “That’s the cool thing about coaching for a long time … you get to see the other end of the tunnel. And that’s when you realize that what we do as coaches is important.”