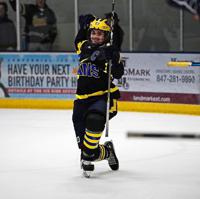 Senior Will Papalas scored the game-winning goal last Nov. 24th when Glenbrook South defeated Glenbrook North in the annual day-before-Thanksgiving rivalry game for the first time in 15 years. His second period unassisted tally was the dagger that silenced the Spartans as the Titans triumphed, 3-1.

“That was one of my best hockey moments; it was great to get that victory,” said Papalas, a three-year varsity forward, usually on the left wing. “That was the most fun game of my career and one of the best games of the season for this team. Everyone brought the right mentality, was just ready to play and that’s all you can ask.”

“That win was in the top three games of my career,” along with past playoff games.

South stands at 9-6-0-5 in the 11-team Scholastic Hockey League which is, without question, the most challenging in the state. GBS scored an overtime victory Jan. 15th over New Trier Green, 4-3 – and Papalas had an assist in the victory.

“The season has been going pretty well. Our season is better than our record shows, which includes five overtime loses,” he said.

Papalas, who shoots left-handed, is the lone Titan remaining from the 2019-2020 season, when South was set for a final four showdown against Glenbrook North before the COVID-19 pandemic stopped the season.

He also wants to excel this season for his brother, Theo, who was a senior on the pandemic-shortened season. Now a sophomore at Indiana University, Theo was an amazing role-model, Will said.

“Me and Theo have similar skillsets (on the ice). We’re both big with a hard shot, physical players,” Will said. “One thing I really learned from him is, work ethic. Watching him get where he was, watching him do what he did motivates me.”

“He always pushed me to work hard.”

Papalas carries a strong shot and speed that is tough for defenders to stop. He knows how to use his size to his advantage. Plus, he has a solid ability to read the play, know where to be and when. He also knows how to keep the team’s energy high, their spirit high. “It’s really important to me that everyone is on the same page,” he said.

Papalas, who calls himself a grinder on the ice, has 4 goals, 8 assists in 19 league games.

Off the ice, Papalas enjoys golfing, skiing, and weightlifting. In fact, he has a basic at-home gym in his family’s garage that has paid off in games.

“I usually work out five days a week, though less during the season,” he said. “I did a lot of hockey-specific exercises during the off-season, such as single leg exercises, squats for instance, which have really paid off (on the ice).”

“Growing up, one thing I lacked (on the ice) was speed, so I focused (in the gym) on what I could do to get faster, such as squats and running.”

Papalas is convinced that South can make a deep run in the league and state playoffs. “One thing we definitely have going for us is, attitude,” he said. “We have a lot of guys who know what they have to do; they come to the rink ready to improve. And we just have fun on the ice.”

But skating deep in the league playoffs will be one tough ask as the SHL boasts Loyola Gold, New Trier Green, Glenbrook North, Saint Viator and others. “It is a tough division, but that’s exactly how we like it,” he said. “It wouldn’t do much help for us playing against teams regularly that we’d beat 10-0. Playing against the better teams (in the state on a regular basis) is good for us. We know that we can stay with the best teams in the state.”

Favorite Sport (other than hockey): Golf