As a Saint Ignatius freshman, Sebastian Wigfield turned in a 62-save performance against perennial power Stevenson in the JV state tournament and though the Wolfpack lost, 1-0, the game gave Wigfield the needed confidence and knowledge that he can control the pace of a game. 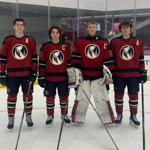 Now a senior, Wigfield is still stopping pucks for Ignatius – and one of the main reasons that the Wolfpack is poised for a run at the Kennedy Cup and the state tournament.

Wiggy, as he is known to his teammates, lives in Oak Park and is in his third season on the school’s varsity. He formerly played for the Chicago Jets and Chicago Blues – and he sports uniform No. 35.

He also sports the “C” on his jersey and brings a calm disposition, plus consistent work rate and effort to the ice.

“I don’t have much of an outspoken leadership role, but I can effectively communicate and connect with everyone on the team,” said Wigfield, who was born in the UK and was in kindergarten when his family moved to the Chicagoland area.

He followed his brother and learned to skate.

“(I) don’t remember my first game but can remember how thrilling it was strapping on the community goalie gear when I was trying out goalie for the first time. I felt really clumsy, but movements and reactions came more naturally than playing forward,” Wigfield said. “I’ve learned to play a simpler game, adapting to the higher speed and pace at the high school level. I use my size to fill space and make calm decisions.”

He brings a hybrid/positional-based style.

Wigfield said he’s been influenced by his brother’s hockey career and long supported by his parents on his hockey journey.

Wigfield is still undecided on his college plans, but certainly hopes to continue his hockey post-high school.

Wigfield also played two varsity golf seasons for Ignatius, and it certainly has helped his hockey. “Golf gives me full control over the outcome of the game. It also allows me to take a break from hectic times and just get outside,” he said.

Best Hockey Tip: “Everybody wants to be a beast until it’s time to be a beast.” – Saint Ignatius assistant coach Spencer Montgomery

Off-Ice: “I golf, listen to records, and grow bonsai trees.”

Calming: “Working out and taking walks with my dogs let me get some peace of mind. I play best when I have no anxiety or wasted headspace on irrelevant details of the game. These activities let me enjoy the moment and give me a break from the rink, which subsequently helps my performances on the ice.”

Little-Known Fact: “I’m a dual citizen, lived in Wisconsin, and have two giant bonsais in my room.”

Teammate Who You Could See As A Hockey Coach: Will Karnick