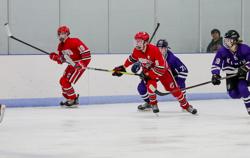 Deerfield was trailing in the third period of an IHSHL North-Central Division game in early-December against the co-op Chicago Central Romans. Senior captain Noah Becker dished the puck to his younger brother and linemate Josh Becker, who tallied to tie the game with 7:38 left in regulation time.

The elder Becker scored the game-winner 23 seconds later, assisted by his brother.

That shift was, “my favorite on-ice moment,” so far this season, the elder Becker said.

The Warriors are 16-5-3 in the top-tiered North-Central Champions League. With 35 points, Deerfield only trails co-op PREP (44 points).

The Warriors finished their 2022 league slate with a 9-0-1 record in their last 10 games, including wins over arch-rival Highland Park (twice) and New Trier White, among others.

“From a team perspective, the season has been going well. We have some great players and we know we have the skill to make it far in state,” Becker said. “We are currently in second place so, as of now, we are meeting one of our goals, which is to finish in the top 3 in our league.

“I’ve been happy with my play from a personal standpoint, but it’s really all about the team. We’ve had a lot of success so far, but we still have a lot to prove. I believe we can play with any team in the state, and I know we have the potential to make some noise in the state tournament.”

Especially with Becker & Becker on the same line. Noah plays right wing, Josh is the right-handed shooting center and the left-handed-shooting Sam Shapiro is the left wing.

Noah, 17, is in his third season on varsity, a right-handed shooter in jersey No. 9. Josh, 16, a sophomore, is in his first full varsity season, with No. 10 on his jersey.

This is their second-ever season as teammates.

They last played together when Noah was a second-year peewee and Josh was a first-year peewee – and their team that season won Silver Sticks, and they were able to even play together in Canada. 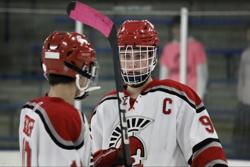 “Being teammates with Josh has been a unique experience,”
Noah said. “We argue like brothers, but, at the end of the day, we always have each other’s back and have a good laugh together.”

The Becker memories have been plentiful this season, such as a 5-2 December win over Glenbrook North Gold. Each had 5 points, assisting on the other’s goals.

“Josh always knows where I am on the ice, and he also knows where I’m going to be. That creates a lot of opportunities for us,” Noah said. “I give him feedback on the bench and try to help him improve his game. Josh has a lot of skill, and he really doesn’t need that much help from me.”

Noah has 20 goals, 23 assists in 24 North-Central games, putting him tied for second in league scoring (43 points) only behind IceCats’ forward Tyler Kolb (46 points). Josh is fourth in the league with 15 goals, 25 assists (40 points).

Noah also is tied for the league lead in power play assists (9).

“Being voted captain by my teammates was obviously a huge honor and meant a lot to me,” said Noah, who lives in Deerfield and formerly skated for the Northbrook Bluehawks. “Playing on a line with Josh has been awesome. We know each other’s strengths and always have a sense of where each other is on the ice, which gives us a big advantage over the other team’s defensemen. I also need to point out that our other linemate, Sam Shapiro, is a great finisher and has been a huge part of our success.”

Noah is a playmaker, always looking to get others involved in the action. His on-ice creativity is definitely a strength. Plus, he is a team leader. “For the most part, we are a young group, so leading is important, whether it be by bringing the team together off the ice or leading by example on the ice with hard work.”

College Plans: Is considering Illinois, Wisconsin and Indiana. “Wherever I end up, if I have the opportunity to play hockey at a competitive level, I would be thrilled.”

Away From Hockey: “I love music and playing guitar. I love rooting for Chicago sports teams and watching NHL games.” He also plays for the school’s tennis team.

Off-The-Ice: “I work-out after school, which has helped me a lot, especially in games, since we have a relatively short bench. I also watch a lot of NHL hockey, which gives me ideas for new moves. Tennis helps my conditioning and coordination.”

Little-Known Fact: “I am a self-proclaimed musician who loves playing guitar and jamming out … though some of my teammates may already know this from car rides with me.”

It’s A Fact: “When I was younger, my dad built an ice rink in our backyard every year, which not only helped my and my brother’s game, but also created a lot of great memories for us and for our teammates. My mom is my biggest fan, and she hasn’t missed a game of mine for as long as I can remember.”

Numbers: “Growing up, I was always No. 21, but when I got to high school, I switched to 9. My dad’s favorite player growing up was Bobby Hull, so naturally I grew up admiring him and that’s why I’m number 9, (as did Hull). Also, (Dennis) Hull wore No. 10, so we talked my brother into wearing number 10.”

First-Ever Game: “My first-ever travel game was against the Bulldogs. I remember scoring the first goal of the season for our team and winning.”

Influences: “The biggest influences on my career have been my dad and brother. If it weren’t for my dad’s love of hockey, I wouldn’t have started playing. He always had me on the ice, whether it was outdoors or on the ice with the Bluehawks. This is what really drove my love for the game. My competitive relationship with my brother also is a big influence. We are always trying to one-up each other with moves and stuff like that, which helps us both get better.”

Favorite Hockey Memory: “Playing in the Lions Cup in Sweden against players who are now getting drafted in the NHL. Getting the opportunity to stay with a host family in Sweden and to make friends around the world has shown me how special hockey is.”

Best Hockey Tip: “If you’re not getting better, you’re getting worse” – From his dad, who stole it from a bunch of coaches, Becker said.

Teammate Who You Could See As A Coach: Zach Margulis