The tiering round is currently underway and upon completion, the league will be divided into two divisions, Scholastic and Founders.  It is sure to be a very tight contest again this year to determine where the teams will end up.

The tiers will be decided just after Halloween and the second half of the season kicks will kick-off in early November.  The teams then enter the Metro playoffs and championship series.  In addition, all eligible teams will compete in the Blackhawk Cup in March. 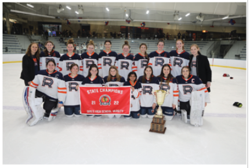 Congratulations to the Chicago Romans Orange – the 2022 Illinois State Champions!

The State semi-finals featured two very exciting, close games. In the first, Loyola faced off against the Chicago Romans with the Romans taking the game with a score of 1-0. In the second game, New Trier Blue and Upper Fox Valley battled hard and UFV took an early lead 2-0. New Trier battled back and eventually took the victory with a 4-3 score.

The championship game was held on Sunday, March 13 at the Edge in Bensenville. The Romans jumped out to a quick lead, scoring two unanswered goals in the first period and one in the second. New Trier battled back hard in the third, scoring two goals early in the third period. Latin managed to add one more and beat the Trevians 4-2. 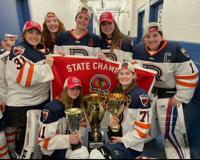