Shane Gustafson Reflects on His 15-Year Career As Hockey Official 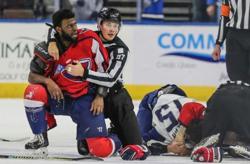 He was a two-time all-star centerman, team captain for Crystal Lake South’s hockey team and finished top 10 in league scoring before graduating in 2014.

Shane Gustafson also was a local official, starting in stripes even before entering CLS.

“I started officiating when I was 12 (years-old) and for the first few years it was nothing more than a way for me to make some extra money,” he said. “I never saw myself making a career of officiating, let alone moving across the country to work full-time as a linesman. Growing up, everyone wants to be a player; you never really think about officiating until the opportunity begins to present itself.”

Well, the officiating opportunities have hit Gustafson like a Zdeno Chara slapshot, and he’s scored with all. Just consider his resume from 15-years as an official:

“Playing was a tremendous help for officiating. You develop a hockey sense, and you learn to think about what is going to happen next and not what is happening right now,” Gustafson said. “You also develop a sense of emotion for playing the game. This helps you realize as an official what the players may be going through and why they may be asking certain questions in certain situations. Playing helped me as an official tremendously.”

Gustafson’s officiating career took off when he joined the USA Hockey Advanced Development Program (ADP). That was, he said, “one of the most pivotal moments of my career.” That’s because, he did not know until part of the ADP that there were higher-level officiating opportunities very close to home.

“I never knew I could skate high school and college games as a teenager; I never knew that junior hockey was achievable at that age; I never knew that you could continue working and eventually work Tier 1 Junior and minor pro leagues,” Gustafson said. “My amazing mentors in the ADP are the ones who opened those doors for me. Erin Blair Gnagni, Brad Baumruck and Nicole Davis, to name a few. There were so many people who have helped me grow over the years. The late Ben Allison was really the one who got me in the direction of Junior hockey, which is where my career completely took off.”

Gustafson, 26, worked about 65 games pro games this past season, including the first-round of the AHL’s Calder Cup playoffs and the ECHL’s Kelly Cup Final. In fact, he was on the ice for the deciding final seconds of Game 5, when the Florida Everblades won the Cup at home in front of a sold-out crowd.

Gustafson, who lived in Lake in the Hills, has not officiated locally in three or four years. Back in 2019, he skated a Chicago Wolves game with family and friends cheering – for this referee – from the stands.

He said working the Kelly Cup finals a few months ago was “such an honor and humbling experience.”

“You truly don’t realize how fortunate you are until you realize you are (working the) very last game of the season,” Gustafson said. “It makes you realize that hard work does pay off. It is incredible to be on the ice with some of the best players in the world, in front of sold-out crowds where you can’t even hear yourself think.”

“I am very proud to represent IHOA and Illinois,” Gustafson said. “The cool thing about this job is, you work with so many amazing officials from all different parts of the world. There were nine officials selected for this year’s Kelly Cup final and for me and (fellow Illinois native) Jack Young to both be selected to work it, that shows that Illinois and IHOA/AHAI are doing things the right way.

“I owe all of my success in officiating to my roots in Illinois and truly would not be the official I am today without so many people (from Illinois).”

“The main thing I learned was to slow down, take it all in,” he said. “You will only get to skate so many finals, and they sure do go very fast, so being able to take a few seconds here and there to look around and truly appreciate how fortunate I was – that to me was the best lesson I learned.”

Gustafson will again split time this upcoming season between the ECHL and the AHL. His long-term officiating goals include working more international events – from the IIHF World Junior Championship (WJC) to the Men’s World Championship to the Olympics.

“The main thing I tell (other officials) is, control what you can control,” he said. “A lot of times when we go on the ice, games can go sideways at any second. Most of the time, we cannot stop this from happening; we can just react to it. All we can do is give ourselves the best opportunity to succeed in these situations. We need to know the rules. There is no excuse for (officials) not to know the rules. This is our job we willingly signed up for and we need to make sure we know that rulebook and its interpretations.

“Control your fitness level and make sure we are staying in shape, so we can keep up with the game and be in the right position and get the best sight lines. The game is constantly getting quicker, and we need to adapt. Also, control our emotions. Players, coaches and parents can be very emotional at times, and it is our job to stay level-headed and communicate ourselves in calm manners. Knowing when to skate away from a certain situation is just as important as knowing a certain situation in the game.

“Lastly, I would tell everyone to enjoy the ride. Enjoy being in the locker room with your friends. Enjoy being on the ice skating around, whether you are working a kid’s game, or Game 7 of the Stanley Cup Final.

“As Ben Allison always wrote on the bottom of his skates, “Skate every game like it is your last.” You will make some amazing memories and friends over the years, so please embrace this amazing career and enjoy every second of it.”

In 2016, the Ben Allison Award was created to recognize deserving officials in the USA Hockey Officiating Development Program. The award is voted on by 150 members of the USA Hockey Officiating Development Program and given to the official who best represents the characteristics that made Ben a special person and official, including always giving 100 percent on the ice and representing USA Hockey in the finest manner.

Gustafson and Allison were teammates at CLS.

“Tyler absolutely deserves it,” Gustafson said. “He works extremely hard and is a great person off the ice. I am very proud of the officials selected for this honor over the years and am truly humbled to be lumped in with the other great names on that list as the inaugural winner. Each official selected deserves the honor and have so many qualities that Ben would be extremely proud to be associated with. I love this award and all that it means. It is such an amazing way to honor Ben and continue his legacy.”

Officiating Superstitions: “Not really. I usually try (to) stretch and get ready at the same time before every game. I always need my pre-game coffee. To this day, I still get nervous before each game I work. I usually feel the pre-game nerves during the National Anthem, but once the puck goes down, it is just like any other game. I absolutely love going out for the pre-game hot laps. Nothing cooler than when the lights are out and the music is blaring in front of a sold-out (arena); that really gets me fired up.”

One Illinois Moment: Officiating the Illinois High School Hockey Combined Division State Championship Game – and he was a teenager himself at the time. “That will always stand out as my favorite Illinois memory,” he said. “Growing up a Chicago Blackhawks fan made the experience that much cooler. Getting to be on the ice at the United Center in front of thousands of fans … that was such a surreal experience and, honestly, great foreshadowing for where my officiating career was heading.”

Career Reflections: “I cannot believe it has already been 15 years. It feels like just yesterday I was at my very first seminar in Crystal Lake. It is just a humbling career path, because even though I have been doing it for 15 years, I still am learning and improving (in) every single game. I never would have imagined the places this game would take me 15 years ago, but I sure am grateful and can’t wait to see what is in store for the next 15 years.”

Special Thanks: “I want to take a second to say how extremely grateful I am for everything I have been able to accomplish through officiating. I am so very blessed and really appreciate all the love and support I have received from my fellow officials from Illinois and around the world. I can’t wait to see what the future has in store.”